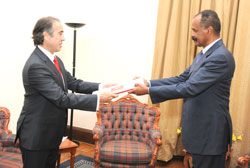 The Ambassadors who presented their credentials are:

During the presentation ceremony held at Denden Hall here in the capital, the Ambassadors expressed readiness of their respective countries to work with Eritrea on the basis of mutual interest in the sectors of trade and investment, political and diplomatic activities, as well as other areas of interest.

Mr. Firat Sunel, Standing Ambassador of Turkey told Erina that Eritrea and Turkey have long standing relations, and that his country wants to maintain such

relationship. He also said that Turkey would open an Embassy here in Eritrea.

The Ambassador further indicated that Turkey would conduct feasibility study as regards prospects of trade and investment between Eritrea and Turkey, and that preparation is underway for Turkish Airlines to begin Asmara-Istanbul flights.

Mr. Faad Saad Almeilih, Ambassador of Kuwait, on his part explained that the relations between Eritrea and his country based on mutual interest would be strengthened.