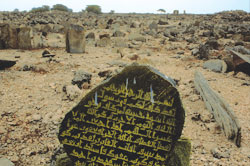 The Dahlac Archipelago is an island group located in theRed Sea. It consists of two large and 124 small islands. The pearl fisheries of the archipelago have been famous since Roman times and still produce a substantial number of pearls. Only four of the islands are permanently inhabited, of which Daklak Kebir is the largest and most populated. Other islands of the archipelago include Dhuladhiya, Dissei, Dohul, Erwa, Harat, Harmil, Isra-Tu, Nahaleg, Nakura, Norah and Shumma, although not all are permanently inhabited.

The islands are home to a diverse marine life and sea birds, and attract an increasing number of tourists. The people of the archipelago speak Dahlik. The islands can be reached by boat from Massawa

G.W.B. Huntingford identified a group of islands near Adulis called “Alalaiou” in the Periplus of the Erythraean Sea, which were a source of tortoise shell, with the Dahlak archipelago. According to Edward Ullendorff, the Dahlak islanders were amongst the first in East Africa to convert to Islam, and a number of tombstones in Kufic writing attest to this early connection.

In the 7th century an independent state emerged in the archipelago, but it was subsequently conquered by Yemen, then intermittently by the Kingdom of Medri Bahri  (Land of the Sea) 1517, when theOttoman Turks conquered them and placed the islands under the rule of the Pasha at Suakin as part of the province of Habesh.

The archipelago became part of the Italian colony of Eritrea, when it was formed in 1890. However, during this time the islands were home to little else except the Nacura prison camp operated by the Italian Colonial Forces.

After Ethiopia allied itself with the Soviet Union during the Cold War, following the rise of the Dreg, the Dahlak Archipelago was the location of a Soviet Navy base.

The more than 200 Islands of Eritrea create great opportunity for yacht cruising (scuba) diving and (pearl) fishing.  Some islands have shores lined with mangrove trees or salt bush. Shoals and

Currently Eritrea has some attractive dive sites that have great potential for tourism attraction. Some of the important dive sites in the Dahlak Archipelago and north of Massawa include: Desie, Madot, Nakura, Kundubul, Dahlak, Durgam, Durgella, Dehle and Dehl Bahot. All the islands have natural, good, long white sandy beaches which are excellent for recreation. The offshore water is also excellent for swimming, sport fishing and water sports.

The largest island, Dahlak Kebir, which is located 58 kilometers from Massawa, is some 643 km² with a population of about 1,500. It was the chief port for pearl fishing in the southern part of the Red Sea.

Dahlak Kebir offers opportunities to visit Afar fishing villages, as well as ancient Turkish and Islamic ruins. The many hundred years old Arab inscriptions, the monumental cisterns, and the 360 wells are important living historical footprints, the proof of a high level of historical development that took place in Dahlak Kebir.

One of the important and historical Islands is also the Nacura Island. Nacura is an island situated west of Dahlak Kebir. In the early years of the Italian colonial rule i.e. 1891/1892, the island was established as a detention camp for the anti-colonial Eritreans as well as opponents from other Italian colonies.

During the Ethiopian occupation of Eritrea the prison was used by the Dergue. Thousands of political prisoners lost their lives, indicating the bitter conditions of this prison.

Self-Motive of the Disabled: Key to Self-reliance Part I