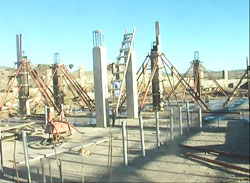 The inhabitants of Nacfa and Adobha sub-zones asserted that they would continue engaging in popular development popular undertakings.

Nacfa, 06 December 2013 – The inhabitants of Nacfa and Adobha sub-zones asserted that they would continue engaging in popular development popular undertakings. They made the pledge in connection with the tour of the Administrator of the Northern Red Sea region, Ms. Tsigereda Woldegiorgis’.

The inhabitants expressed satisfaction with becoming beneficiaries of potable water supply and availability of water reserve both for livestock and irrigation. They further stated that they have collect stones with a view to giving impetus to the construction of dams in Embalqo and Abelo areas.

Ms. Tsigereda inspected the tropical fruits introduced in various areas of the locality and told agriculture experts that the input of communities as regards soil and water conservation as well as other domains is praiseworthy. She also called on the remaining sub-zones to emulate such initiative and the inhabitants to sustain their efforts, in addition to expressing the Administration’s readiness to collaborate to this end.

Reports indicated that around 8,400 tropical fruits such as apple and peach as well as olive have been planted in the sub-zones, while more than 90 ponds have been put in place.