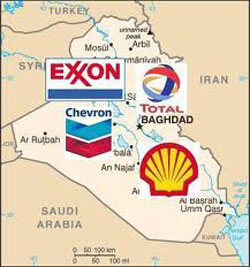 Declassified documents now reveal what everybody, especially the Iraqis, always knew: the US invaded Iraq to secure its oil supplies for US and allied companies. It hasn’t quite worked out as planned

After the invasion, the US purged Ba’ath, Iraq’s single political party, which had been in power since 1968, was grounds for dismissal, compulsory retirement or worse. Seventeen of INOC’s 24 directors were forced out, along with several hundred engineers, who had kept production high through wars and foreign sanctions. The founding fathers of INOC were ousted by the Deba’athification Commission, led by former exiles including Iraq’s prime minister Nuri al-Maliki, who replaced them with his own supporters, as incompetent as they were partisan.

Rob McKee who succeeded Philip J Carrol as oil adviser to the US proconsul, observed in autumn 2003: “The people themselves are patently unqualified and are apparently being placed in the ministry for religious, political or personal reasons… the people who nursed the industry through Saddam’s years and who brought it back to life after the liberation, as well as many trained professionals, are all systematically being pushed to the sidelines”.

This purge opened the door to advisers, mostly from the US, who bombarded the oil ministry with notes, circular and reports directly inspired by the practices of the international oil industry, without much concern for their applicability to Iraq. The drafting of Iraq’s new constitution and an oil law provided an opportunity to change the rules. Washington had decided in advance to do away with the centralized state, partly because of its crimes against the Kurds under Saddam and partly because centralization favors totalitarism. The new federal, or even confederal, regime was decentralized to the point of being de-structured. A two-thirds majority in one of the three provinces allows opposition to veto central government decision.

Only Kurdistan had the means and the motivation to do so. Where oil was concerned, power was effectively divided between Baghdad and Irbil, sea of the Kurdistan Regional Government (KRG(, which imposed its own interpretation of the constitution    deposits already being exploited would remain under federal government control, but new license would be granted by the provincial governments. A fierce dispute arose between the two capitals, partly because the KRG granted license to foreign oil companies under far more favorable conditions than those offered

by Baghdad. The quarrel related to the production sharing agreement. The usual practice is for foreign companies that provide financial backing to get a share of the oil produced, which can be very significant in the first few years. This was the formula US politicians and oil companies wanted to impose. They were unable to do so.

Iraqs parliament, so often criticized in other matters, opposed this system; it was supported by public opinion, which had not forgotten the former IPC. Tariq Shafiq, founding father of the INOC, explained to the US Congress the technical reasons for the refusal. Iraqs oil deposits were known and mapped out. There was therefore little risk to foreign companies: there would be no prospecting cost and exploitation cost would be among the lowest in the world. From 2008 onwards, Baghdad started offering major oil companies far less attractive contracts-$2 barrel for the bigger oilfields, and no rights to deposit.

ExxonMobil, BP, Shell, Total, and Russian, Chinese, Angolan, Pakistani and Turkish oil companies nevertheless rushed to accept, hoping that things would turn to their advantage. Newsweek (24 May 2010) claim Iraq had the potential to become “the next Saudi Arabia”. But although production is up (over 3 mbpd in 2012), the oil companies are irritated by the conditions imposed on them: investment costs are high, profits are mediocre and the oil still underground  is not counted as part of their reserves, which affects their share price.

ExxonMobil and Total disregarded the federal government edict that threatened to strip rights from oil companies that sighed production-sharing agreements relating to oilfields in Kurdistan. Worse, ExxonMobil sold its services contract relating to Iraq’s largest oilfield, West Qurna, where it had been due to invest $50bn and double the country’s current production. Baghdad is now under pressure: if it continues to refuse the conditions requested by the foreign oil companies, it will lose out to Irbil, even if Kurdistan’s deposits are only a third of the size of those in the south. Meanwhile, Turkey has done nothing to improve its relations with Iraq by offering to build a direct pipeline from Kurdistan to the Mediterranean. Without the war, would the oil companies have been able to make the Iraqis and Kurds compete? One thing is certain: the US is far from achieving its goals in the oil sector, and in this sense the war was a failure.

Alan Greenspan, who was chairman of the US Federal Reserve from 1987 to 2006 was well placed to understand the importance of oil, came up with the best summary of the conflict:” I am saddened that it is politically inconvenient to acknowledge what everyone knows: the Iraq war is largely about oil”.

“With dedication and hard work success is inevitable”