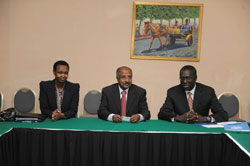 In the course of the meeting at Asmara Palace Hotel, Mr. Osman Saleh gave extensive briefings to the delegation focusing on the objective situation in the Homeland and the achievements registered in various domains in general, the stance of the Eritrean government as regards human rights and human trafficking, including trading in human organs, in particular. The briefings also included the tasks accomplished pertaining to foiling anti-Eritrea agendas, including the unlawful and unjust sanctions.

Following the meeting, Mr. Abdoulaye Mar Dieye told Erina that the visit is well-timed, and that it provides the UN and the Government of Eritrea with the opportunity to discuss implementation of the strategic Partnership Cooperation Framework Agreement concluded in January 2013.

He further indicated that the UN has reiterated its commitment to support the nation’s development endeavors, and stated that Eritrea has made significant progress towards achieving the objectives of the Millennium Development Goals, particularly in the domain of health.

The delegation also visited the Southern and Central administrative regions today, during which it observed the ongoing development activities. In the course of the visit, the members received briefings by the Administrator of the Southern region, Mr. Efrem Gebrekristos, medical experts and others at the regional Referral Hospital, as well as the Fistula Center in Mendefera city.

Likewise, members of the UN delegation visited the agricultural project in Merhano and the potable water supply project in the area, in addition to the dam in Adi-Lamza, including the irrigation farming activities in its environs, among others. The Administrator of the Central region, Mr. Kahsai Gebrehiwet, accompanied the visiting UN team during the tour of the development sites in the region.