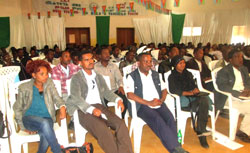 The National Union of Eritrean Youths and Students (NUEYS) has conducted annual assessment meeting from the 13th to the 16th of this months.

Asmara, 17 December 2013 – The National Union of Eritrean Youths and Students (NUEYS) has conducted annual assessment meeting from the 13th to the 16th of this months.

In the course of the meeting in which more than 300 officials, cadres and youth representatives took part, the restructuring activities carried out within the current year were evaluated thoroughly, while heads of the Union’s regional branches and other functions presented reports focusing on the implementation of the programs set for implementation vis-à-vis the challenges thereof.

The participants of the meeting held in-depth discussion on the reports presented and emphasized the need of working on priority basis as regards nurturing dynamic youths as well as competent cadres on the basis of undertaking thorough trainings and popularization of national values.

Moreover, the Union has mapped out new programs targeting college and High School students, including those in Sawa, besides the setting up of a body in charge of the follow-up of youth centers. The participants also discussed the agenda items extensively, and put forth views in a bid to realize the cherished goals.

Speaking at the meeting, Mr. Saleh Ahmedin, Chairman of the NUEYS, pointed out that the available human resource capacity constitutes the utmost ensured asset, and called on members to play due role in the implementation of the programs awaiting implementation.

In the latter session of the meeting, Mr. Yemane Gebreab, Head of Political Affairs at the PFDJ, conducted a seminar in which various issues on reinforcement of the Union were discussed.