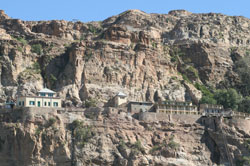 ‘Three seasons in two hours’ is the theme of the Eritrean tourism sector. But I guess that would only be one version for those who had the opportunity to travel in the Southern Region, where one travels through layers of time in just a couple of hours. Expedition in the Southern region of Eritrea is one big adventure for archaeological wonderers, geological admirers and historical references; all in one package.

Around 20 kilometers drive from the monastery is the city of Mendefera, capital of the Southern region and again the road towards the south west of the city takes to the town of Adi Quala in around 30 kilometers. A dirt road towards the west from Adi Quala leads to Adi Begi’o, another very important village, which occupies

a center stage in the recent defeat of the Ethiopian invasion. It is a battle front with a very strategic location commanding the plains bordering with Ethiopia. It is an easy drive of around three kilometers south east of the Adi Begi’o trenches; the path goes through some fine agricultural land with a superb view of the escarpment.

The mausoleum of Daero Kuna’at, tells of a significant historical event in the region as it is the resting place of some 8,000 Italian troops lost at a battle in March 1896. The mausoleum is well preserved and open for visitors.