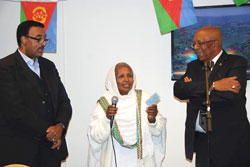 The Eritrean National War-disabled Veterans Association (ENWVA) has indicated that it has obtained material support worth 200,000 Euros from its branch in Sweden.

Asmara, 20 December 2013 – The Eritrean National War-disabled Veterans Association (ENWVA) has indicated that it has obtained material support worth 200,000 Euros from its branch in Sweden. The support includes wheelchairs, crutches, computers, printers, office equipment and dental laboratory, as well as other health implements.

Mr. Gebrebirhan Eyasu, Chairman of the Association, disclosed that the branch office was launched in 1994 by Eritrean philanthropists, and lauded its continued initiatives as regards extending such support. He further stated that the support which was granted in collaboration with Swedish stakeholders is in line with the Association’s demands, and that the current backing constitutes a second phase within this year.

Meanwhile, Eritrean community members in Stockholm city, Sweden, asserted that they would step up participation in

national endeavors of raising the production capacity of disabled citizens.

They made the pledge at a fundraising event thereof, during which Mr. Yonas Manna, Charge’d Affaires at the Eritrean Embassy in that country, said that the Eritrean government has been extending various types of support in this regard.

According to Mr. Tekeste Fisehaye, Head of ENWVA’s branch office, the association has been shipping 2 containers-full supplies annually backing members in the Homeland.

A community recreational center was inaugurated on the occasion of the fundraising event that witnessed a variety of cultural performances.

Anseba region: Ministry’s branch to further efforts in a bid to promoting effectiveness of health services