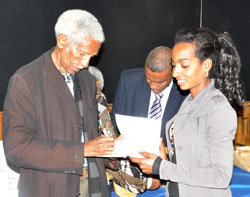 He is around 72 years of age. Born from a family of farmers who eventually turned to an Aviation inspector and currently into a writer. Mr. Mesfun Haile Gebemichael took his elementary school education in Debarwa and part of his high school education at San Georgio High School in Mendefera.

As Mark Caine rightly said “the first step toward success is taken when you refuse to be a captive of the environment in which you first find yourself’, Mr Mesfun did not end up into the environment he grew in. He rather went out from his surrounding environment to pursue he future carrier. He joined the Asmara Technical School and graduated with diploma in mechanics. After graduating from the Technical School he joined the Ethiopian Airlines as a ground technician.

Mr. Mesfun didn’t stop there, as a ground technician. He once identified what king of a person he would be and continued to develop his profession in aviation technology through correspondence to climb the ladder from ground technician to aviation inspector.

With the profession he acquired he has been able to work as an aviation expert at the Ethiopian Airlines, Saudi Arabia Airlines and T.W.A.

With regards to his social interaction, I consulted his nephew Mr. Amine Zemichael Haile, and he told me that Mr. Mesfun is a kind person who always ready to help is fellow compatriots in what ever assistance they need.

During the armed struggle for independence Mr. Mesfun has been a devoted member of the EPLF clandestine organization. He has been several times to the field to witness the armed struggle for independence and what the EPLF was doing in every aspect of the struggle. His name is mentioned in the book “Miracles of 18 Minuets”, by Solomon Drar, the commando operation that destroyed around 30 jet fighters of the Derge. During his carrier as an aviation expert at the Ethiopian Air Lines he had a good knowledge of the in and out of the Air Lines, to the extent on how to get in and get out of the premises. And with that knowledge he contributed his part for the success of the operation. And indeed the operation was very much successful and broke the back bone of the Derge regime.

On Friday 13 December, Mr. Mesfun launched a book titled “Sekem” , literally meaning “Load”. The heading of the book has double meaning, while literally it means load. The message in the book is that human kind is destroying the environment knowingly or unknowingly.

Currently, Mr. Mosfun is retired. And his future plan is to settle back home and transfer his expertise to young Eritreans.

I wish him all the success in his endeavors.

The big why Part II and Final