The big why Part II and Final 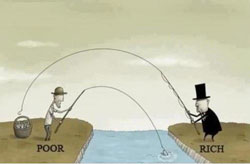 Failure is the rule. Here, Venice provides a cautionary tale. Upward mobility drove the city-state’s wealth and power. Its innovative commanda, a partnership in which capital-poor sailors and rich Venetians shared the profits from voyages, allowed those of modest background to rise through the ranks. This fluidity threatened established wealth, however. From the late 13th century the ducal council began restricting political and economic rights, banning the commanda and nationalizing trade. By 1500, with a stagnant economy and falling population, Venice’s descent from great power was well under way.

Moves towards greater inclusivity are disappointingly rare. The French revolution provides an example, but also demonstrates the author’ unfortunate habit of ignoring historical detail. Revolution put paid to absolutism and led, after a long and messy struggle, to the creation of an enduring republic. Institutions, in the form of a fledging merchant class, provided momentum for reform, making the difference between the successful French revolution and failed uprisings elsewhere. But the authors give short shrift to the presence and meaning of the Enlightenment ideals. It is difficult to believe this did not matter for the French transition, yet the intellectual climate is left out of the story. History is contingent, the authors apologize, but history is what they hope to explain.

The story of Botswana is also unsatisfying. There, a co-operative effort by tribal leaders secured the protection of the British government against the marauding imperialism of Cecil Rhodes. Despite its considerable diamond wealth, which might have spawned a corrupt and abusive elite, Botswana became a rare success in Africa, assisted by the benevolence of its leaders and by having a tiny population. At times the authors come dangerously close to attributing success to successfulness.

The intuition behind the theory is nonetheless compelling, which makes the scarcity of policy perceptions frustrating. The book is sceptical of the Chinese model. China’s growth may be rooted in the removal of highly oppressive Maoist institutions, but its communist government remains fundamentally extractive. It may engineer growth by mobilizing people and resources from low-productivity activities. Like subsistence agriculture, toward industry. But without political reform and the possibility of creative destruction, growth will grind to a halt.

Rich countries determined to nudge along the process of industrial development should recognize their limitations, the authors reckon. The point is well taken. It is hard to ignore the role of European expansionism in the creation of the underdeveloped world’s extractive institutions which, in self-perpetuation fashion, continue to constrain reform and development. Evidence nonetheless hints that contagious ideals, propitious leadership and external pressure matter. The promise of European Union membership encouraged institutional reform in central and Eastern Europe. America eventually eradicated extractive southern institutions and placed the South on a path toward economic convergence. There is no quick fix for institutional weakness, only the possibility that steady encouragement and chance will bring about progress.
Source: DIGEST, compiled by RDC