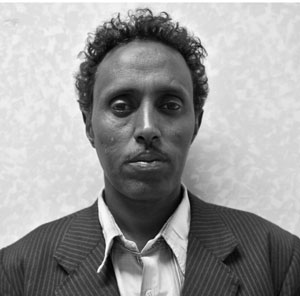 His name is Mahmud Mohammed Ahmed. He was born and grew up in Asmara. He took his elementray education at Al-Mahd Al-Islamia Elementary School and secondary education at Adlis Secondary School. After independence he taught Saho language for over 15 years. And in 2001 he got scholarship at the University of Copenhagen and graduated with first degree in Linguistics and Educational Studies.

-Tell us about your background.

I was born in Hazhaz, Asmara, and I grew up there. I was keen in my education and I was prize winner. I was also good footballer, but I didn’t continue playing. I took referee course and become referee.

-How come you become a referee?

I don’t know it just happen. May be I didn’t join first division clubs.

-Let’s go back to your carrier as a teacher.

I took crash course on pedagogy and I was assigned in 1992 as a teacher of Saho language.

-As you said you were born and grew up in Asmara, how come you master the Saho language?

Saho is my mother tongue. At home we speech Saho. But that was after I became teacher of the language that I happen to understand it deeply.

-How were you received by your students?

-What about to date?

I have been in the area for over 15 years. I changed a lot.

-In which areas have you served as a teacher?

I have been as a teacher and supervisor in Tsorona sub-zone for over 10 years. 2 years in Adi-Keyh sub-zone and for 2 years as a director at Igela junior high school.