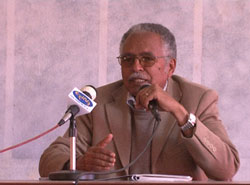 The Agriculture Ministry’s branch in the Central region indicated that it managed to register commendable accomplishment as regards afforestation as well as soil and water conservation this year.

Asmara, 26 December 2013 – The Agriculture Ministry’s branch in the Central region indicated that it managed to register commendable accomplishment as regards afforestation as well as soil and water conservation this year. It made the remark at an annual meeting last Tuesday, during which it was stated that the afforestation ventures covered a total of 641 hectares, thus showing a 12% increase in contrast to last year’s achievement.

Accordingly, the dams in Daero-Pawlos and Gul’e have been renovated at a total   expenditure of 16 million Nakfa, while a new mode of irrigation techniques has been introduced on a total of 150 hectares in the environs of the dams around Lamza, Adi-Hakefa, Adi-Tsenaf and Adi-Keih areas. Moreover, there is a plan to cultivate green feed on 115 hectares along the banks of Mai-Bela River, and that  more efforts would be made to raise milk production.

Mr. Abraham Daniel, Head of the branch office, disclosed that veterinary service has been rendered to more than 100,000 livestock, as around 68,000 others have been vaccinated. Enhanced endeavors would be exerted to meet the demand for meat, he added.

Also speaking at the meeting, Mr. Arefaine Berhe, Minister of Agriculture, lauded the achievements made pertaining to soil and water conservation in general and afforestation in particular, and called for the facilitation of the ongoing activities regarding green feed production. He further called on trained professionals to collaborate with farmers in connection with the pursuit of introducing temperate fruits.

In the same vein, the Administrator of the Central region, Mr. Kahsai Gebrehiwet, said that it would work on priority basis in a bid to effectively applying Geographic Information System in raising agricultural output, in addition to calling for widespread use of compost and launching of more school-based Green Clubs.

The participants of the meeting put forth views on a number of issues.

Beauty – A Blessing Or Characteristic