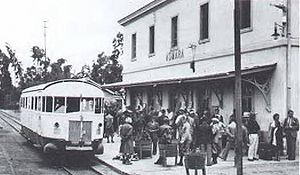 The history of railway system in Eritrea goes back to the time of Italian colonization over Eritrea mainly for the purpose of transporting Italian war machines to the highland.  Originally the railway system was meant to connect Massawa with Asmara but later after the then Italian ruler felt he has the power to conquer Kassala thought to enlarge the system to the area but it stopped short to reach only up to Bisha.

The construction of line had also to take difficult and narrow turns and to fit that narrow gauge railway had to be applied. The line required 36 bridges and 39 tunnels. That was considered at that time renowned world class achievement.

trains daily and by 1965 the line was carrying nearly half a million passengers a year as well as 200,000 tones of freight.

However, from 1941 the progress of the railway line began to see its set backs. The Allied Forces from 1941 onwards began to demonstrate that they had the upper hand and the Axis members that included Italy were on the run loosing step by step every land the occupied. In 1942 The Italian army was defeated in most parts of Eritrea by the British Army and with that the railway line connecting Agordet with Bisha was destroyed.

During the years to come under the British protectorate, the Eritrean railway line and other port facilities have witnessed more damage and destruction. The British in 1944 dismantled the Italian built, in fact one of the wanders of the time in Africa, Asmara-Massawa Cableway that supplemented the railway as a means of transportation inland, and the equipment was sent to British colonies elsewhere.

In 1953 Eritrea was forcefully and illegally annexed by the Haileselasie regime of Ethiopia. And the railway line successfully operated until the 1970s after which it fall more and more out of use as the armed struggle for Eritrean independence escalated.  In 1975 the Derg regime destroyed the railway line and its infrastructure and used the material salvage for construction of fortifications.
That was the end of the railway history for years to come before independence.

“The joy of painting is enormous…”