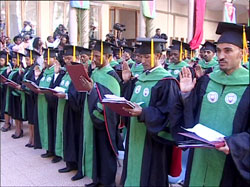 A total of 56 Medical Doctors who have been pursuing their studies in Orotta School of Medicine for 8 years graduated today.

Asmara, 28 December 2013 – A total of 56 Medical Doctors who have been pursuing their studies in Orotta School of Medicine for 8 years graduated today.

Speaking at the graduation ceremony in which senior government officials, the School’s stakeholders, invited guests and parents took part, Ms. Amina Nur-Hussein, Minister of Health, said that the government’s endeavors as regards promoting societal wellbeing have borne visible impact. She further indicated that human resource development constitutes one of its priorities in this connection.

The Minister went on to explain that the health outreach and improvement of service quality thereof could enable Eritrea hold an exemplary image among the sub-Saharan countries, and said that the graduates are due to play due role in giving added impetus to such triumph of the nation.

perseverance in a bid to arriving at this career milestone, and called on them to demonstrate the expected ethical standards and values as health professionals.

Prof. Mujahid Abdulrahman, Dean of the Sudanese University of Al-Jazeera, stated on his part that he could witness the development accomplishments Eritrea is registering in the course of his exposure to the country, and expressed the University’s readiness to enhance partnership with Orotta School of Medicine.

A representative of the graduating batch asserted that the commencement of their graduation shoulders responsibility as new health professionals, and voiced their readiness of serving the people with dedication.

Established in the year 2004, Orotta School of Medicine has so far graduated a total of 152 Medical Doctors.

Following the ceremony, the graduates told Erina that they would do their level best to live up to the expectations of the nation, and thereby serve the people with dedication.

Inhabitants of Foro, Gelalo and Massawa sub-zones express readiness to back up national development programs