Eritrea As Always In Favor Of Healthy Partnership and Cooperation 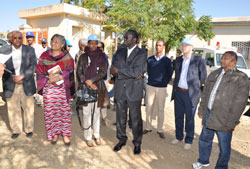 What has to date been achieved in Eritrea is, of course, not the end but a start of sustainable success stories. “Seeing is believing” and making participatory observation makes one have a clear and an undistorted, an unembellished but rather exact picture of the subject matter. A second or third hand information on the contrary could only give a mixture of real and distorted image the ultimate result of which is only a shabby one.

During its stay in Eritrea the UN development delegation team held meetings with Eritrea’s high ranking officials. It, for instance, held discussions with Osman Saleh, Foreign Affairs Minster, Dr. Ghergish Teklemichael, Minster of Economic Development, and Mr. Brhane Habtemariam, Minister of Finance as well as other high ranking officials about different development programs that have been implemented in the country.

In the occasion Mr. Osman Saleh said that Eritrea works for a safe neighborhood and a cooperative regional environment without which no nation can achieve sustainable development and thus the country seeks and welcomes genuine bilateral and multi-lateral partnerships.

The high-level UN development delegation team visited healthcare institutions in the Southern region, and water supply projects as well as solar irrigation system sites in the Central region. Hence, it has captured the real image of Eritrea in its own eyes.

Mr. Abdoulaye further pointed out that the Eritrean government should share its success stories with the international community because the positive impact being made in the country needs to be told. He also said that such stories should be documented as best practices and the United Nations is ready to partner with Government to achieve that.

In any sort of relationship two or more parties may cooperate in a number of development programs and if that partnership stars to bear fruit there would definitely be a reinforced partnership and cooperation among the parties. Thus, any sort of international cooperation and partnership is result based. It is the achievement registered in different development programs and above all its steady foreign affairs policy which enabled Eritrea to have a healthy relationship with international institutions which prioritize unconditional but rather genuine engagement.

Eritrea has been committed to achieve sustainable progress in different development sectors. It would also further reinforce its commitment to achieve even what seems impossible. The UN development delegation has discussed and witnessed the country’s priority and therefore according to Mr. Abdoulaye (head of the delegation) following its discussion the delegation has learned a number of possible entry points for deepening its cooperation with Eritrea and taking it to higher level of engagement.