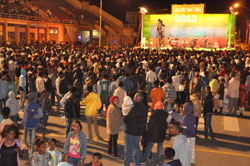 A cultural show was staged on New Year eve through the joint collaboration of the Administration of the Central region and PFDJ Cultural Affairs at Bahti-Meskerem Square, Asmara.

Asmara, 01 January 2014 – A cultural show was staged on New Year eve through the joint collaboration of the Administration of the Central region and PFDJ Cultural Affairs at Bahti-Meskerem Square, Asmara.

The show that involved three cultural troupes embracing veteran and young artists was live broadcast on Eri-Tv. Such event constitutes the third one in its type, and has witnessed an aspect targeting children, according to reports.

Among the participants, Mr. Tekie Aradom from Germany, Ms. Belainesh Bogatsion, Mr. Tewolde Mebrahtu, and Mr. Tekle Tesfamichael, an artist, expressed satisfaction with the overall environment of New Year celebrations in the Homeland. They further voiced conviction that the Eritrean people inside the country and abroad would mount resolve for still more gratifying accomplishments in all State affairs in 2014. He further called for inspired work drive on the part of fellow citizens.

Speaking on the occasion, the Administrator of the Central region, Mr. Kahsai Gebrehiwet, pointed out that the year 2013 provided the groundwork for giving added impetus to the national development drive. He also asserted that the Eritrean people and their leadership would register higher development outcome thanks to their steadfastness and the experience they have acquired to this end.

Our Vision Is Emboldened By Our Hard Work!