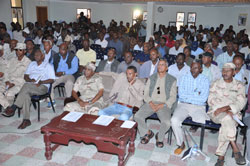 The Administration of Gash-Barka region indicated that the development programs implemented in 2013 pursuing socio-economic and infrastructural domains constitute a stepping stone to further achievement.

Barentu, 02 January 2014 – The Administration of Gash-Barka region indicated that the development programs implemented in 2013 pursuing socio-economic and infrastructural domains constitute a stepping stone to further achievement. It made the remark in connection with an assessment meeting conducted this week in Barentu city. In the course of the meeting, the participants conducted in-depth discussion focusing on agricultural activities, the teaching-learning process, health services, infrastructural and administrative plans and social welfare, among others. They also pointed out that the role of communities has become vital in various development activities, and called for sustained popular initiatives in the future.

Speaking at the meeting, the regional Administrator, Mr. Mohammed Hamd, said that 3 dams capable of reserving a total of 590,000 cubic meters of water have been constructed, besides the putting in place of micro-dam projects in Mensura and Laelai-Gash sub-zone at a total expenditure of around 3 million Nakfa. He also disclosed that the Administration had spent more than 10 million Nakfa targeting vaccination of livestock against external and internal parasites, thus attaining outreach to over 1,300,000 of them.

Accordingly, 2 health institutions, 3 schools and 6 potable water supply facilities have been launched at over 41 million Nakfa, while 151 projects of this type are under implementation.

To this end, the Administrator outlined the work plan for 2014, and called for stepped-up integrated efforts on the part of pertinent bodies and communities.

The participants of the meeting exchanged views on a number of issues.

In closing remarks, Maj. General Haile Samuel, Commander of the Western Command, expressed appreciation for the pace of development activities in the region. He further called on the regional Administration to mount stepped-up endeavors in a bid to reducing mortality of mothers in connection with pregnancy and raising student competence. Maj. General Haile further expressed the Command’s readiness to collaborate with the regional Administration.

For once, last year was also a New Year