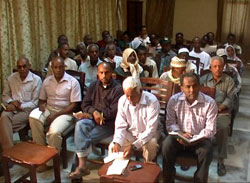 The Assembly of the Southern Red Sea region held 12th regular meeting in the port city of Assab.

Assab, 03 January 2013 – The Assembly of the Southern Red Sea region held 12th regular meeting in the port city of Assab.

The Assembly members heard reports pertaining to socio-economic, infrastructural and others issues, and assessed that gratifying accomplishments have been registered regarding environmental hygiene as well as construction of roads in collaboration with communities and members of the People’s Army. They also pointed out that accessibility of social service facilities has witnessed increased outreach thanks to the initiatives taken to promote community-based style of living, the pursuance of  which task enhanced the exertion of sensitization efforts to be undertaken.

The participants of the meeting exchanged views on a number of agenda items including ways and means of enhancing female participation in education, renovation of malfunctioning potable water supply facilities and reinforcement of youth activities.

In closing remarks, Mr. Ali Mahmoud, Administrator of the region, noted the vitality of the views put forth by the Assembly members pertaining to giving impetus to development activities, and called on them to enhance role in connection with promotional ventures.

In the same vein, Mr. Ali Nur, Chairman of the Assembly, said that the national development drive has gained rewarding momentum, and asserted that the Assembly would strive for the realization of the cherished development goals.

Gahtelai residents to back up implementation of development programs