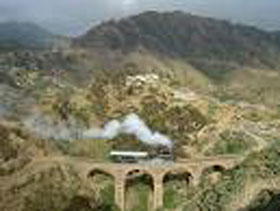 These small 0-4-0 tank engines were and are the standard shunter locomotives of the system, built between 1927 and 1937 by the firm Breda in Milan. They have short side tanks, a rear coal bunker, and a unified, oval dome containing the steam dome inside a larger sand dome-this arrangement, popular worldwide in nations that favored the sand dome, helped both to insulate the steam dome and to keep the sand dry with the warmth. Large, prominent builder’s plates adorn the domes. They are painted in the traditional European style of red below the running board, including frames and wheels, and black above, including boiler, cab, tanks. The purpose of the red paint is to make cracks and breakages in the locomotive’s important gear more obvious.
The railway purchased two Krupp-built BO-BO road switcher of typical German offset-cab design in 1957, the newest motive power owned by the system

and the only locomotives purchased after World War II. They are painted in a creamy white brown frames and trucks.

Three Drewry Car Co. Built shunters are owned by he railway, and were brought to Eritrea by the British after their take over in 1941. They were previously in service in the Sudan and were of slightly wider gauge, they weree regauged to the railway’s 950mm gauge by turning them from an outside framed to an inside framed layout.

The Fiat made Lotterina’s railcars survived the days of the armed struggle for Eritrean independence and two were in working order. They are attractive looking, rounded things, very Art Deco in style, with large Fiat radiators on the front. The bodies are painted in creamy white with grey underneath and roofs with red bumpers on the ends and a red stripe separating the body color from the grey below, which looks quite attractive. They are intended for tourist service.

One 4-wheel railcar built by Brown Boveri of Switzerland existed which was used as a mobile generator car before the struggle for independence. Currently an improvised maintenance four-wheeler built from motor-cycle is being used.

“My students love me simply because I love them more”.