Instances of various diseases on the decline in Southern region: Report 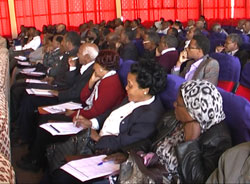 The Health Ministry’s branch in the Southern region indicated that instances of various diseases have generally shown visible decline in the course of 2013.

Mendefera, 06 January 2014 – The Health Ministry’s branch in the Southern region indicated that instances of various diseases have generally shown visible decline in the course of 2013. It made the remark at an assessment meeting conducted in Mendefera city, during which coordinators of health institutions in the region pointed out that such achievement largely pertains to diseases such as malaria, diarrhea, respiratory infections and ophthalmic diseases.

Accordingly, 85% of the TB patients who received medical treatment during the past year have recovered fully.

Speaking at the meeting, Mr. Abraham Yemane, Head of the branch office, disclosed that a number of infrastructural health facilities have been put in place in the region, including the National Fistula Center and an Assembly at the School of Associate Nurses. Malfunctioned solar energy facilities in various health institutions have also been renovated, while several training courses were paganized, he added.

The participants of the meeting put forth views pertaining to many issues.

Also speaking at the meeting, the Minister of Health, Ms. Amna Nur-Hussein, said that the Ministry has been exerting enhanced endeavors with a view to laying the groundwork for efficient and equitable health services, and called on health professionals to sustain hard work so as to register still more gratifying accomplishment. She further explained that training courses would be organized inside the country and abroad for health professionals this year.

Mr. Efrem Gebrekristos, the regional Administrator, explained that the way the region is populated entails higher need for medical facilities, and lauded the Ministry’s pervasive and organized activities in the region. He also expressed the Administration’s readiness to collaborate with the Ministry.