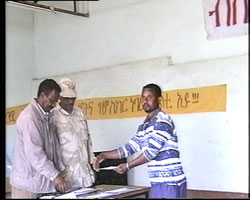 All and sundry have heard about the talented actress Mereb Stifanos, her fame has made her to be one of our country’s most known actors. Born in 1983: Mereb has to date participated in 75 small and big film productions, gaining the fame that every actor would dream of and a very large number of fans of different age. Let’s meet Mereb Stifanos on today’s section of Q and A while we will find out more on this talented young woman on the next week’s section.

-Let’s go back to your child hood?

I grew up in Asmara, as a kid I was very quiet and silent and very active at school, I remember how scoring low marks would leave me disappointed so to prevent this I was always stuck with my books aiming to score high marks. I was a member of the volleyball team at school; I actually loved this sport so I played till high school but later I totally dropped it off.

Because I started my acting carrier right after high school, so I shifted my concentration from sports to acting.

-How exactly did you start your acting carrier?

I had no intention of becoming one, as I told you before I wanted to continue my studies and keep on my sport activities… but one day this man came to me and took a long look at me and politely asked me if I would be interested to star in one of his movies because apparently to him I looked fit to one of the movie’s character.   Clearly it was very surprisingly shocking experience for me mainly because I had no idea who was Mr. Fisahaye Lemlem and what he was talking about. He later gave me his address and asked me to contact him.

Yes shortly after but as I told you before without any intentions of taking the offer but solely because I wanted to see if the guy was just coning me. I went to the filming site that the man from the previous week gave me the address to.  Mr. Fisahaye Lemlem is actually no joke, he is a good movie maker and when I went to see for myself I fell in love with what he and the crew that was working with him were doing. They were immersed in their work and I was insistently amazed as I felt some kind of a connection. Soon after I accepted the offer and signed the contract with Mr. Fisahaye Lemlem and debuted as an actress in his movie.

-What was the movie?

It is entoleted “feremeley”. I was acting as a young university student that falls in love with a hard working student, as the story folded their love story ends in tragedy… a great tragedy that brought tears to the eyes of a vast number of spectators. I was the only one with no experience what so ever in amongst the cast, so I was a bit frightened but I was encouraged by my

colleagues and that boosted my confidence latter on in my carrier.

-You underwent off your carrier along with one of the most loved actors.

I know!!! How lucky was I?! I was a big fan of Yonatan (Tantan) ever since junior school and for me to act in so many scenes was just amazing. He acted out as my characters lover… I still remember how many of my friends remained jealous of my luck because he is just simply gorgeous!!!

-Were you satisfied by your performance?

I would not know because I was just a beginner, but many people were: including my parents whom at first hesitated with me pursuing acting rather than my studies, matter of fact afterwards they encouraged me to discover my talent and work on it.

-What about you? Did you easily decided to drop your studies?

Naturally not, matter of fact I was hesitant for a long time even after my debut. I was on a 50/50 mark for so long: I loved acting but I worked hard my whole life as a student. I made up a decision later on: I promised myself if I was in anyway disappointed with acting I would jump right back to my studies. I was not going to let one mere conversation with a stranger I met on my way home from school change my whole life time plan if thing were to turn ugly or simply out of my taste. But as you can see it has more than ten years now and am still in the business; It seems like I never was let down by acting or the people and conditions that I work around…

In the long search for happiness