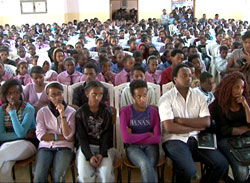 The National Union of Eritrean Youth and Students (NUEYS) indicated that it is pursuing programs in tune with the nation-building process and development activities.

Asmara, 14 January 2014 – The National Union of Eritrean Youth and Students (NUEYS) indicated that it is pursuing programs in tune with the nation-building process and development activities.

It made the remark last Sunday at a meeting with youth representatives, and students, as well as youth cadres from the Central region.

Speaking at the meeting, Mr. Ogbai Berhe from the NUEYS headquarter office pointed out that the Union has begun working on the basis of new organizational character and restructuring with a view to giving added impetus to the process of equipping youths with the desired virtue qualities. He further stated that the organization is anchored on the values of the Eritrean youths and students in connection with the movements and organizations witnessed during the armed struggle for independence, which ultimately gave rise to vibrant awareness as regards nationalism and establishment of the National Association in 1978 in Keren.

Accordingly, the Union’s future undertakings would focus on the nurturing of national and cultural values, as well as inspiring youth awareness targeting schools and colleges.

The participants of the meeting expressed satisfaction with the briefings, and asserted that they would enhance role for the realization of the cherished goals.