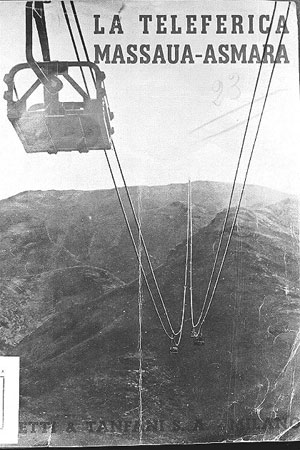 The bearing cables cannot run in a single stretch from the sea to the highland! They are formed, on the contrary, by connecting a series of nearly 30 sections, with their ends connected at trestles (sometimes in the stations themselves) by means of short sections of suspended rail, over which the cars pass without stopping as they go from one section to the next.
In these trestles and in the stations, appropriate systems of counterweights regulate the shape of the chain of the bearing cables, the shape not being fixed, but subject to change so the tension remains constant.

The bearing cables are supported by a series of nearly 500 iron towers (iron like the station buildings because of the risk of termites – a variety of voracious wood-eating tropical ant) of various heights, according to the inconsistencies of the terrain, and of sufficient length (multiple trestle towers) when the slope change at that point is considerable.

Also the drawing cable is necessarily segmented, a single length not being possible on such a long route.

The whole cableway results, therefore, from the linking of partial cableways or sections, individual because of their own drawing cable and independent for the motive power source, which can be limited to a given section or common to two contiguous sections. There are thus single-motor stations – like Ghinda, Nefasit and Godaif – and double-motor stations – like Zaga, Dogali and Digdigta. The make-up of the Massawa-Asmara cableway is, therefore, the following:

•    Two sections operating in parallel departing, respectively, from Campo di Marte and the Munitions Dump (Massawa) and meeting at Zaga.

•    All together the cableway counts 13 stations, eight of which are motorized and five are transfer points.

•    The potential for loading and unloading was planned for the intermediate stations of Mai Atal, Ghinda and Nefasit, as well as for the terminalstations. At Nefasit, because it is the beginning of the road to Decamere, a well known transit center for the interior. At Ghinda, because of the particular importance of the region, served also by rail link with the Eritrean Railways station.

•    The line had been equipped with a complete Perego selective telephone system linking all the stations, with accessory field equipment that also permits conversations

•    The drawing cable also high endurance steel, but it was three-strand with a hemp core. The diameter 22 mm.

•    The 1,620 cars consist of a ball-bearing mounted two-wheel trolley with a gravity device for grasping the drawing cable, a tippable platform with a waterproof tarpaulin adapted for the transport of various goods, and an iron suspension, which provides an articulated linkage between the trolley and the platform.

•    Control of movement of the cableway was in each motorized station by an appropriate capstan driven by a diesel engine. The capstan consisted of a double-groove pulley with a counter-pulley (mounted on a vertical shaft tree) and giving a reduction via two pairs of gears, respectively, conical and cylindrical, driving a fixed and an idler pulley to provide the pulleys an engaged and a neutral link to the engine.
The engines powering the cableway had the following characteristics:

Judicious Utilization of Natural Resources for Sustainable Growth Part I