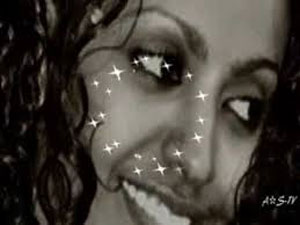 Let’s continue last weeks interview with one of the most respected young actors: the gorgeous Miss Mereb Estifanos. We saw how she took her first steps in the film industry and her primary experiences as a high school graduate going on to be an actress. Let’s find out more on today’s second and final part.

-Shall we continue… what happened after your not planned yet grandiose debut?

Well, after words I stated getting many offers from many directors and film makers. Those were real good and busy times. Some times I was turning down some offers because I wouldn’t be free due to lack of time. I was a lot of time stuck with multiple productions that I wanted to be part of but I had to choose!

-Wouldn’t that be a bit confusing? Especially since you were just a beginner

Of course it was. Mistakes are meant to happen as you take your first steps and I did face situation in which I witnessed my self failing but if we look at the bigger picture compared to the success I achieved they were just mistakes that I learned from and helped me grow. Since we’re on the subject, If I may, I  would use this opportunity to thank dearly all of these people whom literally had my back while strengthening  my two feet on the acting ground: all of the actors, directors and movie makers that I worked with they really helped me be a more matured actress.

-Ok going on… Many of your colleagues tell me you are good with your scripts.

It is true. I memorize my parts really fast and accurately I think being a brainy student helped me have this capacity.

-Did you face any hardships?

I would be lying if I said I never did. I actually did, multiple times actually; but they’ve had all happy endings.

In the sense of facing even the hardships of work, over come them and learn from them so to make yourself a better person and a better actor. I mean it is stiff to avoid situations in which you

feel little or less appreciated situations in which you don’t get along with a co-actor, situations in which your nerves take the best of you and at times you definitely cannot avoid an angry director and so many other aspects of the typical film industry’s nature. But even acting is career where there is a boss that gives you orders, a big number of spectators expecting you to match their anticipation and you really don’t want to let them down. So yeah… it is in deed filled with moments that makes you want to scream but it is actually better that way: roughness makes one an even greater person. And at the end of the work you get to be the happiest for fulfilling your job as an actor, you get a pat on the shoulder from your director and co-workers and you please your fans. So all in all: it is a taught occupation but it is very rewarding.

-Have you ever thought of quitting?

So far I haven’t. God forbid! I don’t to be the “quitter”, I love my job though just like many others I face tribulations I always tend to learn from them.

-What can you tell us about the countless commercials you have been part of?

I started doing TV commercials very late on. But honestly I actually like being on commercials for two main reasons. First it is a form of promotion specially if am currently active in a movie processing it helps me promote my image in the film that am working on. Second reason of why I do commercials is when I am not doing any films… I use to as away of connecting with the people and my fans and remind them that I am not gone.

-People will never stop thinking about their favorite actress. Any future plans?

I am staring in a comedy by Hagos, it will be out very soon. I have done very few comedies so I will do my best not to let you down.

-Any thing you want to say before we end our interview?

I would like to dearly and greatly thank my fans and all of the people that support me. And you of course for this interview.

-Pleasure is all mine, wish you all the luck so that we can have you on the screens of out televisions for a long time to come!

Thank you so much, it means a lot.