Installation of water pipeline along Villagio – Adi-Segudo gets underway 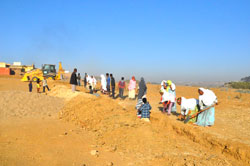 Installation of a pipe line for potable water along Villagio – Adi-Segudo, Asmara, is underway at a total expenditure of 10 million Nakfa.

Asmara, 20 January 2014 – Installation of a pipe line for potable water along Villagio – Adi-Segudo, Asmara, is underway at a total expenditure of 10 million Nakfa.

In charge of the project’s follow-up, Mr. Yohanes Mulu from the Water Department indicated that the facility would serve more than 20,000 residents of the peripheral quarter, and lauded the active participation of the community and members of the People’s Army in the process.

Mr. Gergish Tewolde, Administrator of Adi-Segudo area, and Mr. Tsegai Kidane, member of the locality’s Development Committee, disclosed that the community members raised 1.5 million Nakfa in pursuit of the project’s implementation. They further expressed appreciation for the initiative taken by the Ministry of Land, Water and Environment, and said that they anticipate the implementation process to gain momentum until finalization.

Among the residents, Ms. Zemzem Abdulsalam and Kesete Rusom, member of the People’s Army, voiced appreciation for the government’s commitment as regards ensuring social justice, and asserted that they would continue extending support in the venture.