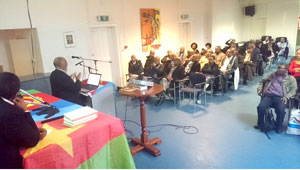 Eritrean community members in the Dutch city of Amsterdam and its environs have expressed readiness to mount staunch resistance against external conspiracies.

Asmara, 21 January 2014 –Eritrean community members in the Dutch city of Amsterdam and its environs have expressed readiness to mount staunch resistance against external conspiracies. The nationals made the pledge at a meeting during which they made note of the role of citizens in the nation-building process and the nurturing of nationalism. They further asserted that they would step up efforts as regards popularization of cultural values among the young generation.

Speaking at the meeting, Mr. Solomon Mehari, Head of Consular Affairs in the Eritrean Embassy, gave briefings regarding the objective situation in the Homeland including the mapped out development programs, and pointed out that anti-Eritrea conspiracies have ended up in fiasco . He also indicated that keeping intact societal harmony and values in the Diaspora constitutes an asset pertaining to nation building, and called for enhanced role on the part of national Associations, communities and families in this connection.

The participants of the meeting expressed appreciation for the development accomplishments being registered in the Homeland, and demonstrated interest to become beneficiaries of the investment prospects in the country.