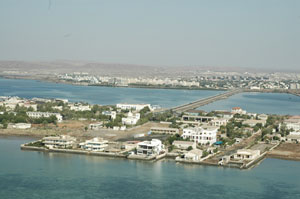 New Year and the Orthodox Christmas were celebrated with much fun fair manifesting how tradition and modernity intertwine. Night had fallen on the ancient city of Massawa, all along the banks of the Red Sea golden ray of sun light flickering to life. Mosques loudspeakers across the city echoing with the pursuing intonation of the call to prayer “Allah We’akber” the faithful dashed to Mosques, the rest of the city carried on with their business. Restaurants serving their customers, merchants selling their goods and the tourists watching with amazement; this was a busy city in harmony. A city of the same force religious, secular, ancient yet contemporary. This timeless city was quite literally the place to be during the New Year. The air moist with a cold breeze unusually cold for Massawa the rain has stopped battering the ground the rivers full to their banks flowing and merging into the Red Sea turning the Sea brown. This was the first time in my life that I stayed in Massawa without immersing myself in the holy Sea.  Massawa was nicely decorated for the New Year the city vibrant, people everywhere, streets crowded, and restaurants full to capacity. The old part of the city known for its outdoor bars was echoing with music people dancing on the pavement.  Down town was scintillating with decoration. Grand Dahlak Hotel, Central hotel, Red Sea hotel and Luna restaurant were packed with dinners. The city was over populated packed with people from all walks of life. I am sure that there were some people who could not find accommodations and were forced to stay with relatives.

Gergusum Hotel known for its white sandy beach was full of people blue environment in place and the weather warmer. There were kids running up and down, some taking the camels for a ride others swimming. There were a lot of young adults swimming further than eye can see. Evening hours in the beach area where the night clubs are located were like no other place. It reminded me of downtown Washington DC on a Friday night with high traffic and no parking space available where people have to walk blocks to reach the clubs. The Red Sea coastal beaches were full of cars. The clubs no surprises to anyone were full to capacity and some had to turn customers away; the music was blasting to full capacity. People dancing, hugging and lovers being affectionate it was a night of excitement and full of joy every one wishing 2014 to be the year of prosperity.

Asmara the morning sun fully rose, casting long shadow down the wide roads that snake between the market place. Shopkeepers had begun throwing open the metal grates and their plastic covers that protect their merchandise and shops; the air misted with the aromas of morning espresso and freshly baked pastries. People were moving in the direction of the markets to start

shopping for the Orthodox Christmas which is celebrated on the seventh of January.

Edaga Asmara’s ancient food and utensil market is one of the largest covered market place in Eritrea. Built in the shape of a square in different blocks have over hundreds small spacey divided rooms.  Local merchants passionately stash a mind-boggling selection of edible pleasures from around the country, fruits, vegetables, herbs, spices, cereals and artifacts are traded. The bazaar’s entry way is a massive open space from all direction and is said to witness the passage of more than a hundred thousand people a day during holidays. Asmara city has a lot of market place; Markato, Mai Aba-Sohul, Shouk and Meda-Eritrea are some famous shopping sites during holidays. All over the city there are open space where small farmers sell hens, roosters, eggs and other additional items. Adding stark drama to the radiant holiday shopping natural heat piercing the dark coldness out of the rooms; Markato market crowded assisted by high, wide deeply recessed windows despite being in them many times one can fill the mystical pull of the space and let your gaze clime skyward. The streets of Asmara were crowded downtown, uptown and outskirt of the city turned as a market place. Live cows, bulls, sheep, goats, rosters and hens sold in the middle of the streets sellers and buyers bargaining over size and price.

Christmas mass attendants’ were reminded by the resonate of the bells coming out the different Churches in Asmara; people are religious and very faithful and loving as they go to Church one can see the unifying and calming effect of religion.  Mothers covered with their white Vaile, fathers with their traditional white cloth, priests and deacons with colorful decorations add to the celebration. As it is the tradition the extended family comes together to celebrate the holidays in a manner that serves the countries social structure. Holiday is an affair of three generations worshiping, eating and spending the week under one roof joyously, with the grandparents showering the family with blessings. Visiting one another to wish happy holiday and seeping coffee; hanging out with friend and relatives is a holiday duty. Young kids who drop by dressed in their new cloth to wish happy holidays to their neighbors’ houses are given gifts. Toddlers are offered sweets. The crowded shop, rushed mothers, men buying live animals and kids with new cloth is what makes the holiday exciting. The day prior to Christmas comes to an end with slaughtering of live animals and preparation of exotic, spiced and delicious food for the holiday. I was beneficiary of these delicious festival meals in three different homes.

What I saw most exciting, amusing and something new this year was the many fashion shows that were preformed in Massawa and Asmara. The one in Asmara was prepared by ladies in their early 20th new graduates of the fashion school. The show went on for about three hours. Clothes made out of traditional materials designed in western and Eritrea styles were out of this world. Seeing the old SHIDA monument turn to a Christmas park was an addition to the holiday spirit. Holiday celebrated with ancient tradition; togetherness, love and respect are things that make Eritrea uniquely loveable.

Let’s stop those freezing cold and lonely stream of tears over heart breaks!