“I consider that studio pottery is the outmost and most gorgeous form of art.” 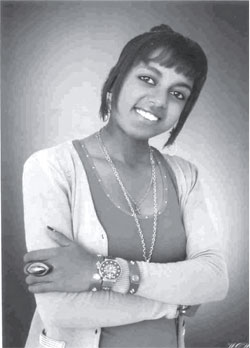 Young but beautifully talented, her name is Yohana Kifle born on December 1992 in Asmara. She is only 21 in age but she presents great work of pottery that look like that they have engraved in them techniques of a grown person , talent of an experienced person and a burning passion of a young art fanatic. She portrays in her ceramics, pottery and handcrafts the unexpected able to provoke in the spectator’s soul a sense of surprise and sweet shook.

-Recently you had a special event and was very special for you, wasn’t it?

Yes it was. My colleagues and I had an open exhibition on the main street of Asmara, in front of the Ministry of Education’s building. It was organized by N.U.E.W (the National Union of Eritrean Women) and its main purpose was to expose so many young girls like my self, whom never had a chance to demonstrate our products.

-What do you produce?

Ceramics, pottery, handcrafts and I am a designer as well. These four things are the things I like to the most: I was driven by my passion to actually take a step further and present what I have been doing in my room for so long.

-For how long have you been doing these activities?

I took on designing a year ago, but for ceramics and pottery… that goes back way back to when I was a little kid of elementary. I used to see my neighbor passionately working on her pottery and I think that is when I made my little mind believe “when I grow up am going to do what ever was my neighbor was doing on a daily bases”. She was my inspiration and my mentor.

-The fact that you have new and strange yet stunning way of portraying your works, doesn’t it put you in a difficult position?

It does because since I am always trying the unexpected I fear rejection. But honestly I don’t mind the negative response, trying out new shapes and colors make me feel super great, straightforwardly though people now-a-days love crazy things especially young people, they actually encourage me to keep it on as they are always thirsty for new, original, innovative and fresh things with a sparkle of an exotic touch.

-What are ceramics? Illuminate us.

Pottery and ceramics have been an important part of human culture for thousands of years. From prehistoric storage jars to tiles on the space shuttles, pottery and ceramics have played a key role in innumerable human goings-on: we could take the traditional cooking pot “tsahali” as an example; there is quite nothing that is not ceramic going on in the traditional Tigrigna kitchen. Technically, ceramics are those things made from materials which are permanently changed when heated. For example, clay has chemically-bonded water in it which will cause it to slake down (disintegrate) when a dried clay object is put in water. Once heated (fired) to between 660? and 1470?F (350? and 800?C), the clay is converted to ceramic and will never dissolve again. All clay is a ceramic material, but there are other ceramic materials, as well. Glazes are also ceramic materials, because they permanently change during firing. Industrial ceramics include a range of materials such as silica carbide and zirconium oxide.

We could say that Pottery is generally considered to be containers made from clay. “Pot” is a term used for any number of container forms. Both words derive from the Old English potian, “to push”. When we consider how the potter pushes as they throw the clay on the wheel, it is easy to see how the process got its name. The term “pottery” may also be used as an adjective with some objects, such as small figurines.

In industrialized countries, modern pottery can be classified two ways. There is commercial pottery or ceramics which are produced in factories, and there is studio pottery which is produced by individual craftsmen. You may also hear of “art pottery,” which may be either produced commercially or by an individual craftsman.

I hear that your true passion lies upon studio pottery.

That is so true; I consider that studio pottery is the outmost and most gorgeous form of art. If I am to speak of studio pottery I could say that; studio pottery (studio ceramics) can be quite diverse. Production potters are most active in making large quantities of ceramic wares such as plates, platters, dishes, bowls, and so on. Production potters can sit down with a hundred pounds of clay and throw the same form all day. The technique of throwing off the mound is often employed by production potters because it reduces time spent centering the clay and moving bats on and off the wheel head. And the thing that impresses me the most is the elevated form of studio pottery which is concerned with creating forms for their uniqueness and beauty. These

“art” pieces might still retain full functionality, or they may move toward being more sculptural. Many of these are “one-off” pieces, meaning they are truly one-of-a-kind.

-Have you presented some studio pottery so far?

Not to the public eye. Not yet because since I think of this form of art really highly I would like to master all of the techniques before I present my production to the public. I just don’t want to disturb the perfect harmony that is engraved in these studio potteries. Yet again this doesn’t mean that I hate to make mistakes but I want to confidently show off my products when the day in which I will be confident on my own abilities.

-And you also stretch your hands on designing…

I do. But I am just a beginner; it is not anything big yet but I would love to professionally approach the world of designing and modeling.

Ohm… it is going to take me a whole week to tell you my wishes and plans, but in few words I would like to tell you that I want to learn more so that I can be a better artist and to present you guys more elegant and artistically matured production.

-Well we really do look forward to your success. Good luck and thank for being with us today.

Thank you so very much!

Let’s stop those freezing cold and lonely stream of tears over heart breaks!