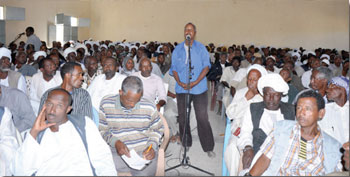 Why deficit of water supply? Why construction of houses has been delayed? Let’s get the answers to these questions from seminars by Tesfai Ghebreslasie, Minister of Land, Water and Environment.

Seminars recently held by Mr. Tesfai Ghebreslasie, Minister of Land, Water and Environment, have opened a venue for discussions on issues of vital concern. As everything discussed in the seminar has an immediate connection with the very living condition of every national, constructive suggestions were forwarded from the participants.

As part of the efforts that have been exerted to ensure sustainable, safe, and sufficient amount of potable water throughout the country, 402 water reservoirs of different size have been constructed. However, the amount of water these reservoirs could impound has been confined between the range of 300 and 400 m3.

The ultimate goal envisaged to be achieved is to daily provide every individual with 30 liters of potable water. According to Mr. Tesfai, Eritrea needs a supply of at least 1.4 million m3 of water that could be used for domestic consumption as well as agricultural and industrial purposes among others. However, the amount of water that has been collected has never met the country’s overall demand.

It is not doubtable that impressive achievement has been registered in the provision of portable water. But, it is also important to notice the huge gap between the demand and supply of water. The amount of water that has been collected in the reservoirs so far constructed compared to the overall demand has not yet been balanced.

With an increase of population and with expansion of the other infrastructural activities, the demand of water supply would, according to Mr. Tesfai, increase from 1.4 million to 2.5 or 2.6 million m3 by 2020.  Thus extensive efforts in water conservation and also judicious utilization of the available resource are required so as to meet the ever increasing demand.

Before independence, access to potable water used to cover 7% of the rural and 30% of the country’s urban population. So, meeting the country’s demand of water would ask for strenuous efforts. So far, water obtained from the 2111 of the 3092 wells drilled in the post-independence period has been consumed in households. So, no matter how huge or how minimal the amount of water is, judicious utilization of such a resources which symbolizes life and growth of life seeks alertness of every beneficiary.

What Mr. Tesfai said about the country’s water resource is that the government of Eritrea has been working hard to ensure that every national gets an access to potable water as a basic right. The supply of water would be improved by far than its current situation but, proper management of such a resource need to be implemented. Taking in to account that Eritrea is situated in a semi-arid geographical area, making a wise use of the available resources is also a message which the minister delivered.

Why construction of houses has been delayed is a question which a number of participants of the seminars asked about. This question has not been answered until the recent seminar was held. There could be various reasons which became causes to the delays of houses construction. Let’s see some pointed which Mr. Tesfai shared with participants of the seminars held in central, Anseba and Gash-Barka regions.

According to Mr. Tesfai, a rise in the prices of construction materials has been the main cause for discontinuation of houses constriction. Insufficient supply of electric supply has also negatively affected production of cement. Hence, cement price has by far increased.

It is then to find ways of getting access to cost effective building materials that construction of houses has been discontinued. Fortunately, Mr. Tesfai indicated that a new generator that has been installed at Ghedem cement factory would enable the cement factory resume its activity at its highest possible production rate. A new brick factor is also under construction. Besides, the government of Eritrea has been exerting efforts to ensure that all nationals get an access to cost effective construction materials.

Therefore, once all the deficits that have been causes for the delay of construction works are solved, the construction of houses would resume in a way that ascertains its sustainability. What the Government is diligently working is to ensure that a lasting solution to the deficits of construction materials so as all activities would be carried out in an accelerated manner.

“I consider that studio pottery is the outmost and most gorgeous form of art.”