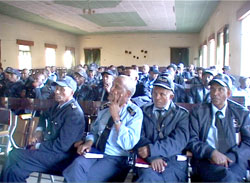 The Office of Eritrean Police Force has conducted annual assessment meeting for 2013 and conducted discussion on future work plan.

Speaking at the meeting, Col. Mehari Tsegai, Commander of the National Police Force, disclosed that the meeting is aimed at scrutinizing the action program over the past 3 years, and reports presented by all departments were assessed thoroughly.

Accordingly, instances of crime have shown a relative decline thanks to the growing Community-Police relations and the pervasive promotional activities conducted thereof, while the trend of accidents has generally dropped by 24%. In the course of the meeting, a call was made for reinforcement of awareness-raising activities in a bid to nurturing widespread behavioral change on the part of drivers and pedestrians.

The participants of the meeting exchanged views on the agenda items, and adopted future work plan.

Moreover, Dr. Yemane Desta from Halhale College of Business of Economics conducted a seminar focusing on the experience of police forces of various countries vis-à-vis ethical and other related issues, according to the Public Relations Department of the Office of Eritrean Police Force.