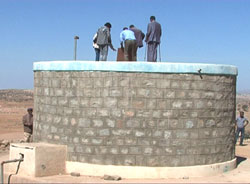 A Potable water supply facility has been put in place in Adi-Gebru village, Berikh sub-zone, at a total expenditure of more than 2.5 million Nakfa.

Asmara, 27 January 2014 – A Potable water supply facility has been put in place in Adi-Gebru village, Berikh sub-zone, at a total expenditure of more than 2.5 million Nakfa.

Speaking at the inauguration ceremony, Mr. Berhane Siyum, Administrator of the village, indicated that there prevailed visible shortage of potable water, and that the inhabitants used to travel a long distance to fetch water. He further lauded the active participation of government bodies, especially the Water Department, in the implementation of the project.

Ms. Leul Asrat, Administrator of Berikh sub-zone, called on the community members to practice judicious utilization of the facility.

Likewise, Mr. Eyasu Habte, Vice Chairman of the Eritrean Red Cross/ Red Crescent Society, disclosed that the facility involves a reservoir capable of storing 250 barrels of water, 3 distribution stations and solar panel. He also and expressed appreciation for all those who made financial and professional input.

Likewise, Mr. Yemane Abai, in charge of agricultural and land affairs in the Central region, noted the facility’s vitality vis-à-vis improvement of community livelihood, especially that of women, and commended the active communal participation demonstrated in the process.

The inhabitants voiced readiness to sustain prudent utilization of the facility.