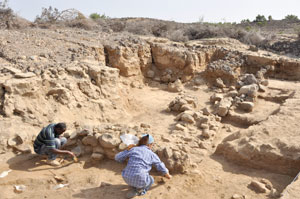 New relics have been discovered in the excavation sites in Adulis, the 4-year project of which task is being carried out in 5 sites in collaboration with Italian archaeologists and paleontologists.

Asmara, 28 January 2014 – New relics have been discovered in the excavation sites in Adulis, the 4-year project of which task is being carried out in 5 sites in collaboration with Italian archaeologists and paleontologists.

Mr. Yohannes Gebreyesus, Head of the National Museum’s branch in the Northern Red Sea region, disclosed that the excavation is being conducted on a total area of 40 hectares, while the discoveries pertain to two temples, ancient ceramic leftovers from the Middle East and Far East, as well as walls and other artifacts.

Among the Italian experts, Prof. Alfredo Castiglioni, explained that Eritrea is endowed with hundreds of thousands of historical sites the secrets of which are yet to be unraveled, and that the ancient Port of Adulis is potentially the oldest one in African history in line with the satiated relics it possesses.

Likewise, Prof. Serena Massa, Scientific Coordinator of the Project and Lecturer in Catholic University in Milan, said that the significance of Adulis as a historical site over Metera, Kohaito and

Keskese lies on the fact that it held a strategic location which enabled it to serve as a gateway to various areas of the continent’s regions. Evidences reveal that it served as a doorway of major merchandizing activities, thus higher significance of this work of excavation, she added.

Dr. Chiara Zazzaro, Archaeologist and Lecturer in Italy’s Oriental University expressed conviction that Eritrea would possess various tourist attraction sites at global level following the conclusion of the excavation as discovery of relics has been continuing.

In the same vein, Prof. Susanna Bortolotto, Scientific Coordinator of Conservation Project Poly-technique in Milan, lauded the endeavors being made to uncover and restore artifacts from the sites in an environment friendly manner.

Among the Museum’s staff members, Mr. Amanuel Bekuretsion and Mr. Daniel Isaias pointed out that the joint venture entails favorable environment for exchange of experience.

Reports indicate that Adulis served as a well-known sea gateway to our region from the 2nd Century BC to the 7th Century AD, according to reports.