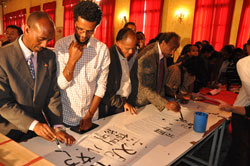 A cultural event was staged last Wednesday by the Confucius Institute in Asmara in connection with the Chinese New Year portraying the Chinese lifestyle and language.

Asmara, 30 January 2014 – A cultural event was staged last Wednesday by the Confucius Institute in Asmara in connection with the Chinese New Year portraying the Chinese lifestyle and language.

Speaking on the occasion in which senior government officials and diplomats were present, the Minister of Education, Mr. Semere Russom, said that the activities of the new center have been encouraging towards furthering joint cultural activities, the impact of which is of paramount importance in fostering bilateral relations.

Also speaking on the occasion, the PRC Ambassador to Eritrea, Mr. Nio King, stated that the active collaboration demonstrated by the Eritrean government in launching the Center attests to the close ties between the two countries. The fact that the students from the Center could already read and write proves their enthusiasm for the mastery of the Chinese official language, and thus the staging of appealing programs by them, he added.

Dr. Wang Shaokha, Dean of the Institute, expressed appreciation for the zeal of the students, and lauded the collaboration of the Eritrean Ministry of Education vis-à-vis the National Board of Higher Institutes.

Among the students, Mr. Berhane Tsigeyohanes, Nejat Berhanu and Estifanos Yosef noted the significance of the Chinese language’s mastery in connection with its merits pertaining to socio-economic issues and technology, as well as their respective professions.

The event witnessed the staging of songs in Tigrinya and Mandarin, while cultural performances by Aser Cultural Troupe were colorful.

It is to be recalled that the Confucius Institute in Eritrea was launched in June 2013 under the umbrella of the Eritrean National Board of Higher Institutes in line with the agreement reached between the two countries.