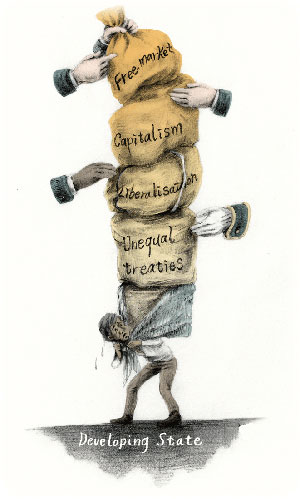 For a long time now orthodox economics has been hindered by its extreme irrealism-a refusal even to attempt a realistic theoretical understanding of how modern capitalism functions. The shift to using fanciful assumptions to explore largely minor issues, following a brief Keynesian moment in the post-Second World War era, has been in many ways self-reinforcing. Once fundamental characteristics of the capitalist economy such as labor exploitation, accumulation, built-in inequality, monopoly power, rent-seeking behavior, technological change, and the tendency to stagnation were removed from the analysis-as a result of an ideological process of system-rationalization-there was little recourse but to fall back in successive stages on more and more abstract models based on increasingly purified notion of individual rationality. This is particularly evident in rational expectations theory, which assumes that all economic actors have not only perfect information but also perfect economic analysis. Thus, while the technical skills of economists improved, their underlying historical understanding was more and more clouded.

Nevertheless, the deepening crisis of today’s monopoly-finance capital has given rise to a new era of questioning within the economics profession, and some top-tier neoclassic, economists are now struggling-though hindered at every step by their own training and inclinations-to recapture knowledge long abandoned (at least outside of the left and some of the more realistic sectors of business and finance). Hence, it is not unusual today to find mainstream economists raising issues of stagnation and endemic financial-crisis tendencies that they had long ago dismissed as left-wing fantasies.

The most recent dramatic development along these lines is the discovery of: (1) the conflict between labor and capital (underlying and shaping the accumulation process and giving it its class bias), and (2) the growth of monopoly power. Thus in attempting to understand why the US economy “is still by most measures, deeply depressed” while “corporate profits are at a record high,” Paul Krugman has recently argued, most notably in a December 9, 2012 New York times column entitled “Robots and Robber Barons,” that this might have to do with these two factors.
Over and over again Krugman has indicated surprise at where his analysis is leading him. “Are we really,” he writes, “back to talking capital versus labor? Isn’t that an old-fashioned, almost Marxist sort of discussion, out of date in our modern information economy? Well, that’s what many people thought; for the past generation discussions of inequality (within orthodox economics) have focused overwhelmingly not on capital versus labor but on distributional issues between workers … But that may be yesterday’s history.” In a related blog entry on December 11, entitled “Human Versus Physical Capital”, he wrote: “If you want to understand what’s happening to income distribution in the 21st century economy, you need to stop talking so much about skills, and start talking much more about profits and who owns the capital. Mea culpa: I myself didn’t grasp this until recently. But it is really crucial.”

Krugman is concerned in particular with the issues of the dramatic drop in the labor share of GDP. He attributes this in part to a labor-saving bias in technology, which he refers to somewhat metaphorically as the rise of “robots”. Reaching back into the past he observes in “Robots or Robber Barons” that “serious economists have been aware of this possibility for almost two centuries. The early-19th-century economist David Ricardo,” he tells us, pointed to just such a tendency in his 1817 Principles of Political Economy and Taxation, which “included a chapter on how the new, capital-intensive technologies of the Industrial Revolution could actually make workers worse off, at least for a while.” Krugman, however, stops short of referring to that other “serious economist” who famously expanded upon Ricardo’s thesis: Karl Marx. Still, Krugman recognizes the significance of his own recent awakening in this respect: “I think it’s fair to say that the shift of income from labor to capital has not yet made it into our national discourse. Yet that shift is happening-and it has major implications” (“Robots and Robber Barons”). Moreover, he is alert to the dangers this spells for the system. “If income inequality continues to soar,” he writes, we are looking at a “class-warfare future” (Krugman, “Is Growth Over?” New York Times, December 27, 2012).