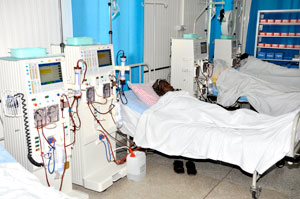 The Ministry of Health has launched a plant in Orotta National Referral Hospital with a view to meeting the oxygen demand for medical purpose.

Asmara, 31 January 2014 – The Ministry of Health has launched a plant in Orotta National Referral Hospital with a view to meeting the oxygen demand for medical purpose.

Dr. Habteab Mehari, Director of the Hospital, indicated that the channel of oxygen supply has been witnessing intermittence, and that the new plant has begun contributing to sustainability in this connection. He further disclosed that the putting in place of the facility was accomplished in line with the Chinese government’s initiative which also pertains to the Hospital’s expansion of infrastructural scope as well as renovation.

Accordingly, the Plant would make vital input to the Regional Referral Hospitals, besides securing reserve.

Mr. Tedros Kifle, one of the engineers who took part in the putting in place of the facility, stated that direct pipes have been installed to the Hospital’s rooms, in addition to the compressing of oxygen in cylinders as a backup. He also said that it has the capacity to produce 8 cylinders of oxygen per hour.

Meanwhile, more efforts are being exerted to give impetus to dialysis service in the hospital.