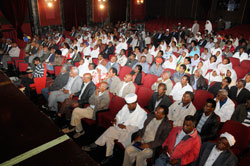 In seminars recently held in Asmara, Mendeferea, and Barentu Mr. Tesfai Ghebreslasie, Mister of land Water and Environment shared ideas with people as regards trees and wildlife conservation, about farmlands given to large scale farmers, land plots given for construction of residential houses in villages, about women’s right to land ownership, about Government’s outlook on issues of land dispute among neighboring villages and so many issues related to people’s livelihood.

In all the seminars, questions were posed whether policies drafted in connection to land use take into consideration people’s benefit or not, such as displacement of people due to development undertaking, if there are solutions to transient permits of investment that have been causes of dismay on the part of investors, whether there is a strict rule that determines the exact distance of a free space between farm areas and river banks among others enriched the extensive discussion which touch varied issues. Mr. Tefai’s answer to the aforementioned questions is as follows:

All policies that have been mapped out as regards land use are mainly aimed at giving utmost priority to peoples standards of living. Thus, every move that has been taken is in consideration to the benefits of people. If there are occasions that demand for resettlement of people, it needs to be done with utmost cautiousness. In case of displacing people so as to conduct different developmental undertakings, all resettlement expenses are made to be covered by the Government.

A transient permit may be given to an investor depending on the nature of the investment. If temporary, therefore, displacing investors now and then would discourage them. Hence, their

activities would be limited since the permit is for definite period of time for just eight or ten years. Thus, there would be reluctance in making huge investment and thus they may not work as much as possible.  If an investor is told all of a sudden to leave the investment area, all efforts made would be meaningless. Thus, making an investor remain indecisive needs to be avoided.  If a hasty decision of administrable bodies is the case for such a challenge, there is no reason why this should not be solved through holding discussions among concerned parties.

There is a clear Government’s Policy as regards the distance between farm areas and river banks. Taking in to account that river banks could get eroded and thus vegetation around it could be endangered, there has been a general law that says any agricultural activity should be carried out 700 meters away from river banks.

It is to be noted, in the first place, that a farmland is given to those who can cultivate it. Administrative measure would be taken on farmers who fail to make use of the farmland which is given to them. A farmer may rent a given land after completion of all infrastructural tasks. Lest, a research need to be conducted to find farmers who try to rent a given land without investing on it, so as to make them shoulder responsibilities to administrative measures that would be taken for the violation of law.

According to a land law issued in the post-independence period, there would be no boundaries among neighboring villages. The government would instead introduce another mechanism of land allotment. If an existing geographical area of any given village is insufficient for the villagers, its fate would be to get urbanized so as to be part of an urban administration system. Villages that remain without farmland have already started to be engaged in activities commonly carried out in cities.

Women have equal right the same as men to have possessions of any kind. Individuals have a full right to decide whether they want to live in their mother’s or in their father’s village. According to an old law, any person had no right to live in his/her mother’s village. But, the new law introduced by the government of Eritrea gives all individuals a chance to live in a village of their preference. It also allows a married woman to have a chance to live in her mother’s or her father village if she wants to. So, any woman has an equal right in all socio-economic services of the country.