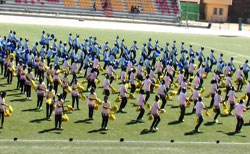 Eritrean students’ sports week that will proceed until 8 February colorfully commenced on 2 February at Asmara Stadium under the theme “Develop Women’s Participation in Sports’.

Asmara, 2 February 2014- Eritrean students’ sports week that will proceed until 8 February colorfully commenced on 2 February at Asmara Stadium under the theme “Develop Women’s Participation in Sports’.

In a speech he delivered during the opening ceremony in which Ministers, Sports Commission officials, representatives of PFDJ and national associations were present, Mr. Semere Russom, Minister of Education, said that the program is the continuation of the efforts to identify the potentials of students and assist them develop, and that nurturing physically competent citizens is timely responsibility of all sectors of the government.

Mr. Mehari Mengisteab, director of the Minister’s office, on his part indicated that over 1,100 students and staff members from junior and high school as well as  technical schools would be participating, and expressed conviction that participants would demonstrate the good national cultural values.

Students Helen Fitwi from Gash Barka region and Salwa Mohammed from Northern Red Sea regions stated that the sports’ week would enable them identify their potentials and become competitive and provide the opportunity to share experiences among students, and that they would work for the success of the program.

The opening ceremony was highlighted with cultural and calisthenics shows by students from Asmara Comprehensive High School.

Predicted level of harvest could not be met in 2013 in connection with limited rainfall: Ministry’s Assessment

Call made for reinforcing organization