Sports activities being conducted in connection with commemoration of Operation Fenkil 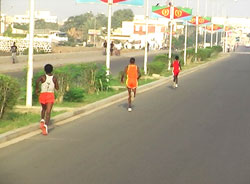 Sports activities are being conducted in connection with the 24th Anniversary of Operation Fenkil commemoration.

Massawa, 04 February 2014 – Sports activities are being conducted in connection with the 24th Anniversary of Operation Fenkil commemoration.

A total of 10 males took part in men’s half marathon tournament inaugurated last Sunday by Mr. Kidane Woldesilasie, Administrator of Tiwalet area of the port city of Massawa, as part of the sports event, and Ahmed Mohammed Ali, Idris Adem Mohammed as well as Osman Adem Humed respectively seized the three first ranks.

Mountain Bike Competition was also conducted on the same day involving 15 and 45 Km. for underage and adult males, while that of females entailed 10 Km.

Meanwhile, Hamlai-Desiet and Selam Teams of Massawa are heading for the final football game of the event.

The sports activities committee of the event stated that successful teams would be awarded on the 9th of this month.