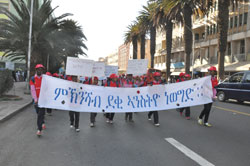 A call was made for higher community participation as regards doing away with harmful customary practices affecting women in connection with the commemoration of the World Anti-FGM Day on February 6 at national level in Asmara city.

Asmara, 07 February 2014 – A call was made for higher community participation as regards doing away with harmful customary practices affecting women in connection with the commemoration of the World Anti-FGM Day on February 6 at national level in Asmara city.

Speaking on the occasion in which heads of the Health Ministry, religious leaders, students and representatives of sub-zonal Administrations as well as national Associations took part, Mr. Zedingil Gorgorios, Head of reproductive health in the Central region, said that the Day is a time when the society should reiterate pledge to put an end to such harmful practices.

Likewise, Dr. Andebirhan Tesfatsion, Head of public health in the Ministry, explained that stepped-up efforts have been exerted in collaboration with stakeholders in this regard, and that subsequently the rate of FGM cases among females aged 5 years of age has dropped to 12% until the year 2010. He further made note of sustaining joint endeavors until total eradication of the grievous customary practice that has been deeply rooted in almost of the entire Eritrean culture.

Mr. Kalab Tesfasilasie, Head of social service in the Central region, pointed out that FGM is negatively correlated with children’s right, besides the fact that it leaves victims prone to suffering and sometimes to death. He also urged mothers to demonstrate boldness towards doing away with the practice.

Also speaking on the occasion, Mr. Dan Odalo, UN Representative in Eritrea, indicated that Eritrea is among the nations which carried out enhanced and effective work against FGM, and expressed appreciation for the Health Ministry’s promotional campaigns thereof. Moreover, Mr. Dan Odalo called for further action towards eradication of the harmful customary practice on the part of all nations.

The Day marked for the 11th time in Eritrea witnessed the staging of cultural performances by Maeger Cultural Troupe.