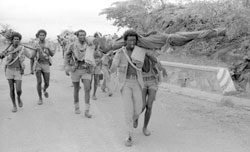 Twenty four years this day Massawa had witnessed a milestone in the history of Eritrea. Signal of the total independence of Eritrea and the doom of the era of colonizers. Fenkil Operation! Fenkil Operation, one of the big offensives carried out by the gallant EPLF fighters to root out colonialism and put independent Eritrea in its right place in the world map and restore the dignity of the Eritrean people as free and independent people was meticulously executed from 8to 10 February 1990.

Operation Fenkil was a battle physically between Goliath and David, for the Derg regime was armed to the teeth with massive help from the then Soviet Union that provided the regime in Addis sophisticated tanks, heavy artillery, modern jet fighters, fighter ships, and other logistical support. These massive and sophisticated war machinery was targeted on the few less equipped but with high morale and dedication of the EPLF fighters. And it was the battle ground where equipment but morale and dedication were proved has the upper hand.  The Derge army was considered by many military analysts that it was the biggest and strongest army in Sub-Sahara Africa. But this big army could not resist the offensive of the EPLF fighters not even for a week.

The offensive which began on 8 February ended on 10 February. It took the EPLF forces three days to wipe out the Derge army from Massawa.

The liberation of Massawa was the beginning of the end of the Dere’s stay in Eritrea as colonizer. Its army was hard hit to the extent its leaders admitted they have been caught by their throat. The throat which is the life line of human being!

Between two weeks after the liberation of Massawa, the Derge regime resorted to indiscriminately bombard the city and as a consequence many innocent lives mainly children were lost. But

that cruel action further emboldened the spirit of the fighters and inhabitants of the city. No matter what the Derge take acts of savagery against the people there was no turning back. The wheel of history has to move forward until it reaches its destination. The total liberation of Eritrea and the end of the Derge’s rule!

One year after the successful offensive of Operation Fenkil, on the 24th of May 1991, the march for Asmara was real and the Derge regime and its army had no alternative but to flee to where their legs take them.  And many could not do it. They remained scattered in the vast lands of the lowlands only to ask for mercy from the people they used to harass and indiscriminately murder.

Today Massawa is marking its 24th  Anniversary of its liberation. As every year in the month of February Eritreans from different walks of life and from different corners of the world gather in Massawa to celebrate the day and to remember the fallen heroes and heroines who gave their lives for the liberation of the city and its environs.

The 24th Anniversary of Operation Fenkil is being celebrated with a theme “Fenkil 2014: On the Threshold of Promising Phase”. After the successful operation it took only one year to liberate the whole country from the yoke of suppression and colonialism and after some years of independence Massawa has all types of infrastructure in place. And the theme reflects exactly to its meaning. All economic indicators in Eritrea attest to the promising stage Eritra is standing. The international community through its organs like that of the World Bank have indicated that Eritrea is registering 7% economic development and is one which is gaining significant economic development in sub-Saharan African countries.

Today Massawa is one of the fast growing cities in the country. Massawa has an international airport, modern port with modern facilities, modern roads, cozy hotels and restaurants and clean beaches in which its inhabitants and other guests coming from all over the country and Eritreans from outside are enjoying.

Eritreans, while enjoying the present day facilities in Massawa, do not forget for a minute the price paid to liberate the city. They also don’t forget the momentous commemoration of Operation Fenkil is not merely a day to celebrate but also renew their allegiance to their martyrs and be an integral part of the ongoing development endeavors in the country. This state of mind will stay in every Eritrean mind for eternity.

“I aim the arrows of my notes targeted at the heart.”

Adulis: The gateway of Eritrea’s civilization