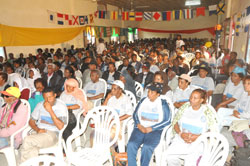 Freedom fighters comprising ex-members of Division-61 are making tour of the historical Ginda Front since the 7th of this month with a view to reinstating the memory of their engagement in the trying battle.

Massawa, 08 February 2014 – Freedom fighters comprising ex-members of Division-61 are making tour of the historical Ginda Front since the 7th of this month with a view to reinstating the memory of their engagement in the trying battle.

At a meeting they conducted at the Naval Base in the port city of Massawa, the fighters already pioneering as an Association heard a report from the Chairman, Col. Kibrom Andemichael, pertaining to the establishment’s profile and manner of electing new Managing Committee. He further indicated that the Association has been carrying out documentational activities regarding the Division’s battle engagement and other significant historical dimensions, and called on the members to extend a helping hand towards popularization of the historical significance of such events targeting the new generation.

A narrative artistic program was also staged in a bid to portray the incidents of the war, while the fighters were entertained by cultural performances along with the residents of Ginda town.

Speaking on the occasion, Mr. Omar Yahiya Haj, Administrator of Ginda sub-zone, recalled the residents of the town’s close ties and collaboration with the freedom fighters, and lauded the Association’s initiative to highlight such a historically significant communal commitment focusing on the new generation.

Moreover, the construction of a Monument was inaugurated today honoring the heroes who fell at the historical site, and the Association members viewed the blueprint headed by Brig. General Tekle Kiflai and Brig. General Temesgen Berhe.

In this connection, Brig. General Tekle pointed out that the area is historically correlated with the debut of the Eritrean people’s armed struggle for independence, and that the erecting of a Memorial of this type is vital as regards popularization of the war battle episode. He further called on the local inhabitants to sustain initiative towards promoting the area’s environmental stability.

The cultural show witnessed various artistic performances highlighting the challenging moments of the battle vis-à-vis the perseverance of the freedom fighters.

Hagaz Administration to step up efforts towards improving community livelihood