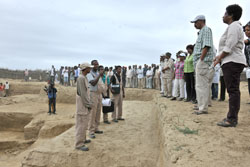 President Isaias Afwerki today visited excavation sites in Adulis, Foro sub-zone, which task is being carried out in collaboration with Italian experts.

In the course of this visit, the President was escorted by the Administrator of the Northern Red Sea region, Ms. Tsigereda Woldegiorgis, and government as well as PFDJ Officials taking part in the commemoration of Operation Fenkil, and he was accorded briefings by the Eritrean and Italian experts regarding the excavation’s findings vis-à-vis future plan.

According to the evidences, the unraveled relics and the other archaeological traces not only attest to the historical importance of Adulis along the Red Sea coast but also reveal the dwellers’ civilization of the ancient port center and their ties with the people of other parts of the globe.

The leftovers discovered so far pertain to a 5-AD Byzantine Temple, gold and bronze coins, Adulite shreds with Persian, Jordan and Middle East as well as Far East background, besides traces of Christianity and Buddhism faiths. Moreover, the excavation process entails a challenge as the area is susceptible to water erosion.

Following the visit to the historical sites, President Isaias and the government as well as PFDJ officials headed to Zula where they witnessed a warm communal reception accompanied by cultural performances and breakfast.