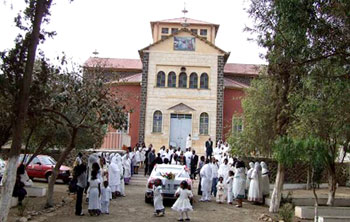 It’s  no  wonder  why  Eritreans for  long  have  dubbed  the  month of January as ‘Tri Ebdi’, meaning crazy  January. The  name  has  its source from the wedding spree that characterizes this month.
This past weekend was the fourth since fasting ended on  Christmas day and Asmarinos have been busy attending to weddings.
Although no one knows for sure the reason  why  weddings  usually take place in this months, the general explanation is that since farmers get enough crop after harvests (usually  the  winter  season),  they habitually prefer to have weddings after the harvest, hence the months of  January–March,  right  before Lent sets in.

As  much  glorious  occasions weddings are, they also tend to be among the wearisome yet unavoidable social obligations.

When  I  was  much  younger  and barely  heeded  to  social  obligations  like  weddings  and  funerals, I used to wonder why my parents expressed annoyance about having to attend various weddings, sometimes several stacked in one day.

Now I know what that fuss was all  about!  Just  this  past  Sunday  I had to go to three weddings, all in the evening. Imagine the hassle!

Whenever  I  hear  about  the  increased  number  of  weddings  my minds travels a few years back to a moment I witnessed at my cousins’ house. It was this time of year and my aunt was grumbling about the stack  of  invitation  cards  piled  on the table. She was complaining not only  of  the  number  of  weddings he had to go to but of the considerable  amount  of  money  that  she had to spend as well. And she was only  talking  about  one  weekend only. She was also probably wondering of the many more weddings she would be going to the two or three months that followed.

Usually  there  are  two  types  of wedding  receptions:  those  where money is accepted as contribution to  the  family  and  the  other  type where you don’t have to pay anything.  In  the  former,  usually  two people  with  a  notebook  sit  at  the entrance  of  the  party  tent  and  accept  money  from  the  guests,  who after paying are led to their seats by a strict master of ceremonies.

In the second type, the wedding ceremonies  usually  take  place  in reception  halls  and  most  of  the times  involve  a  specific  lunch  or dinner banquet. But then there are those people who

feel they should bring  something  to  the  feast  and usually  take  a  bottle  of Areki, an aniseed based liquor.

I  recall  the  invitation  card  of a  wealthy  businessperson  to  his daughter’s  wedding  clearly  specifying that guests should not bring anything  along.  In  spite  of  his abundance, I thought that it was a caring gesture, if not a showy one, on his part.

Meanwhile there is also the question  of  reckless  spending.  How many of these weddings are being held in a mild or prudent manner? And  how  many  are  lavishing  extravagant  receptions  and  long  entourage of cars and limousines.

I know there are people with the opinion that weddings happen only once in a lifetime and no expense should be spared, but a little parsimony wouldn’t hurt.

To  say  that  a  large  amount  of money goes into such extravagant celebrations would only be stating the  obvious.  In  the  days  leading to  the  grand  event,  the  bride  and groom’s respective households are engaged in countless preparations, at  times  accompanied  by  music bands,  sending  the  expenditures even higher.

Starting  from  the  dresses,  jewelry, the rent and decoration of the reception  hall  and  cars,  the  catering, the music band, the invitation cards…  the  list  of  expenditures goes  on  and  on,  rounding  up  to hundreds of thousands of Nakfa.

This has quite a significant toll in the economy of that family, unless of  course  it’s  one  of  an  immense wealth. The ‘economic crisis’ also befalls  upon  the  guests,  who  are subjected  to  heavy  spending  on gifts for the newlyweds or money to be contributed.

And  then  when  the  big  day comes,  although  it  might  differ from family to family, the wedding ceremony takes place in two days. The  Saturday  is  devoted  for  the church ceremony and the entailing breakfast  and  photo  shoots.  Then comes  Sunday  when  the  official wedding reception takes place.

As  my  father  always  insists, money  spent  in  extravagant  weddings  should  have  been  used  for the  livelihood  of  the  newlyweds or in some other useful things such as  buying  household  items,  etc, because  people  seem  to  care  less for the couple once the wedding is over.

“What  is  the  use  of  spending money on something that is going to last for few hours when you are making a vow to spend the rest of your  life  with  someone  and  have nothing at your house to begin this new journey of life?” Winta Weldeyesus had posed that question in her article ‘What  Matters  More Marriage or Wedding?’ a couple of years ago.

Winta talks about the transformation  of  weddings,  both  in  magnitude and kind, and elucidates with examples  some  of  the  wedding reforms  in  our  culture.  She  also gave examples of what she called the  ‘irksome  glitches’  of  wedding ceremonies.  I  couldn’t  help  but laugh at the mention of how some musicians use inappropriate songs at weddings.

What goes on in weddings, both the idyllic and irritating aspects, is another story for another time.