Reserve of basic food crops in place for 2014: President Isaias 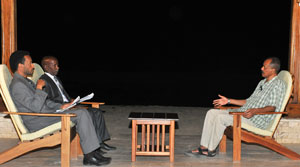 In an interview he conducted tonight in the port city of Massawa with the national media, President Isaias Afwerki said that reserve of basic food crops is in place for 2014.

Asmara, 9 February 2014 – In an interview he conducted tonight in the port city of Massawa with the national media, President Isaias Afwerki said that reserve of basic food crops is in place for 2014.

In this connection, the President pointed out that the Government continues to exert stepped-up endeavors towards introducing irrigation farming on a bigger scale without relying on the intermittent pattern of rainfall in the country.

As regards housing construction programs, he elucidated that the national construction companies have been merged with a view to facilitating the process of securing technological expertise in line with the launching of 3 housing development regions nationwide. President Isaias further stated that pilot projects have already been launched in the environs of the capital.

The President elucidated that nationals who have been discharging national responsibilities with sense of selflessness should be the primary beneficiaries of residential housing facilities. He went on to indicate that a task force has been set up in a bid to control illicit practices of land use, and that the necessary rectifications would be resorted to pertaining to land distribution and use.

Apart from disclosing that various infrastructure projects have been set for implementation this year on priority basis, President Isaias said that new electrification schemes would be implemented in different parts of the country giving priority to ongoing agricultural and infrastructure development undertakings. He also outlined the electrification programs mapped out on the basis of sustainability criterion anchored on regional settings.

President Isaias further gave detailed briefings regarding the issues of health, organizational restructuring and strengthening the People’s Front, among others.