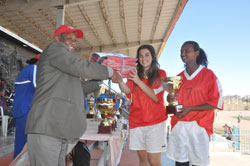 The National Sports Week which got underway on the 2nd of this month concluded last Saturday with spirit of enthusiasm.

Asmara, 10 February 2014 – The National Sports Week which got underway on the 2nd of this month concluded last Saturday with spirit of enthusiasm.

Present at the closing ceremony were Ministers, heads of the Sports Commission, representatives of the PFDJ and National Associations.

Speaking on the occasion, Mr. Mehari Mengisteab, Chairman of the organizing committee, pointed out that the event laid the groundwork for students to demonstrate utmost competence regarding various sports domains, and that such an environment could be ensured on the basis of research as well as sustained efforts. He also stated that the atmosphere of the event attested to the fact that sports development relies on the nation’s investment on the youth, and called on all Administrative regions to exert stepped-up endeavors to this end.

In the same vein, Ms. Halima Mohammed, Head of the Education Ministry’s branch in the Central region, said that sports constitute part of the daily academic activities, and that such aptitude could be demonstrated on the part of students thanks to such school-based theoretical and practical lessons.

Students who achieved higher results received awards on the occasion.