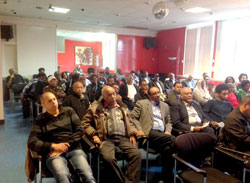 Eritrean community members in the Dutch city of Amsterdam and its environs asserted that they would step up efforts with a view to nurturing national values among youths, besides taking an initiative to raise their professional competence.

Asmara, 11 February 2014 – Eritrean community members in the Dutch city of Amsterdam and its environs asserted that they would step up efforts with a view to nurturing national values among youths, besides taking an initiative to raise their professional competence. They made the pledge at a meeting they conducted last Sunday, during which Mr. Bereket Araya, Chairman of the Community, presented a report focusing on general accomplishments and said that they would put up more endeavors in a bid to inspiring the participation of youth members in State affairs.

In the course of the meeting, community activities concerning public affairs, sports activities and media were scrutinized thoroughly,

while a number of seminars were conducted by experts targeting national issues such as the policy of self-reliance, management and institutionalized work, as well as promoting women‘s role in national development programs.

The participants of the meeting stated that youths have been demonstrating growing participation in various domains, and that they would strive to encourage the youth to make grater input in State Affairs. They also elected a Managing Committee that would serve for the coming 2 years.

Speaking at the meeting, Mr. Solomon Mehari, head of Consular Affairs in the Eritrean Embassy in Holland, gave briefings regarding the objective situation in Holland

vis-à-vis political, diplomatic, socio-economic activities and the hostile attempts concocted to sap the momentum of the nation-building process.

The participants of the meeting voiced appreciation for the development accomplishments being registered by the Eritrean people and their leadership. They also explained that they would become primary beneficiaries of the investment opportunities in the Homeland.

Financial contribution in support of families of martyrs