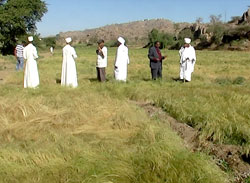 Religious Leaders in Anseba region said that the ongoing development activities in the country attest to the nation’s human potential.

Keren, 12 February 2014 – Religious Leaders in Anseba region said that the ongoing development activities in the country attest to the nation’s human potential. They made the remark in connection with a tour they made to various sites of development projects, during which they expressed appreciation for the level of social service outreach registered in the region vis-à-vis the available agriculture-related infrastructure facilities.

Abune Kidane Ye’ebyo, Pontiff of the Catholic Church in Anseba region, and Sheikh Ali Osman, the Eritrean Mufti’s delegate in the region, lauded the initiatives taken to reinstate the capacity of Elabered Estate Farm, in addition to the extensive soil and water conservation activities focusing on raising food production.

Rev. Paulos Adem from the Evangelical-Lutheran Church in the region and Sheikh Hussein Saleh Mesmer, Chairman of the Islamic Awqaf in Keren city, commended the steadfastness of the Eritrean people in connection with the national development drive. They further asserted that the development accomplishments being registered in the region constitute a springboard to bright future.

Mr. Mohammed-Ali Idris, head of the office of Religious Affairs in the region, pointed out that the tour was organized with a view to enhancing the role of religious leaders in implementation of development programs.