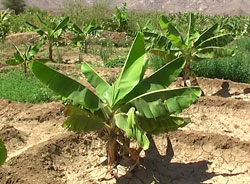 A banana farm launched as a pilot project in Habero sub-zone’s Fiza site, involving plantation of more than 1,500 trees is registering gratifying outcome.

The project has been inspired by the initiative of the Administration of Anseba region aimed at raising agricultural output through enriching water resources and putting in place the necessary infrastructural facilities.

Farmers in the areas point out that the site is characterized by higher rate of soil salinity, and that subsequently farming practices have been limited to sorghum and millet production only. They expressed their admiration to observe that banana as well as guava plantations flourishing well and bear fruit in such an area, and that the community would collaborate with the regional

Administration focusing on construction of diversion canals so as to expand the scope of the project, they added.

Among the farmers, Mr. Mohammed Ali and Mr. Abdalla Suleiman explained that they have acquired substantial experience regarding banana farming, and that the ongoing irrigation activities have inspired production of fruits and vegetables.

Mr. HabteabTeklom, Acting head of the Agriculture Ministry’s branch in the sub-zone, indicated that the project has made remarkable impact in connection with introduction of modern farming techniques in the locality. He also stated that the banana trees are at the stage of ripening, and that the farm would shortly grow by 30 hectares equipped with water wells working with solar energy.