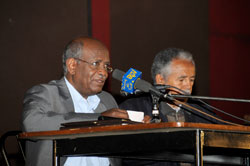 Our very living is closely associated with land, water and generally with environment. Hence, the consecutive seminars held in different regions of the country by Minister Tesfay Ghebreslasie, tries to address issues that are part and parcel of day-to-day activities. There is almost nothing left undiscussed. The deliberations made in such a seminar where people and the minister held talks face to face has clarified a number of  issues that were awaiting for a gratifying answer. Seminars of this kind could indeed by far play significant role in sharing of ideas of different concern. It is in fact a give and take event, where people upgrade their knowledge on different laws particular that of land, water and environment.

Issues that are associated with land use, water management, construction of houses, wild life protection and preservation among others are among the topics set for discussion in the three seminars by Minister Tesfay.

There could be deficit of water, but in the past 22 years a number of villages have become beneficiaries to supply of potable water. As discussed in the seminar, parallel to the efforts that have been made to increase the supply of water in terms of amount and distribution, an increase by 300% has so far been registered.

The ultimate effect of such distribution in changing the living standards of nationals throught out the country is not to be viewed lightly. The amount of water that has been impounded in different regions of the country is also another impressive success that has started to impact the agriculture sector.

Land laws that has been issued and particularly a law that limits the usage of farm land in areas around river banks to be carried out at a distance of 700 meters away of such areas is another instance which is aimed at protecting the national environment from a threat of destruction.

As already mentioned by Mr. Tesfay, the reasons for the delay of housing projects has been due to a rise in prices of construction materials, and deficit of electricity supply. These limitations are now being solved according to the Minister with the installation of a new generator in Ghedem Cement Factory and other remedial initiatives that have been taken by the Government.

Another area in which the seminar clarifies is whether women are entitled to have equal right in a village of their origin as that of men. The answers to such concern is crystal clear. Women of

Issues that are related to wild live and vegetation conservation is also another area in which the seminars discussed in depth. There are some areas in the western and eastern lowlands so far identified to be national parks.  Areas that are habitat of different wild animals and particularly of elephants have already been identified and activities that have been carried out in such areas would be discontinued or would continue under close surveillance so as to prevent or reduce negative effects on the natural environment.

The seminars held in three regions of the country have addressed every single topic that is related to water, land, environment and generally betterment of livelihood. These seminars have indeed answered a number of questions that are of significant importance. All questions related to water, land and environment could not be answered in such seminars but it is a nice start to find remedial solutions through sharing of views on the part of people and administrative bodies.