There were indeed some strong firm roots behind the Fenkel operation. 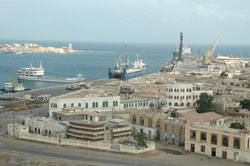 The clear blue waters, the unpolluted fresh salty smell of our sea, the clean bright sands of our costal shores, endless kind of sea livings, gorgeous islands and the yet to be unfold history beneath the soft and warm soil, affectionate and welcoming people… we would never be able to finish doing the list of the grace that Massawa and its surroundings have to offer to its people and tourists from all over the world. A rich blue domination: a heavenly place that we were blessed to own. The old Mosque: an antique that though we’ve seen so many times every other trip we take to Massawa we still look forward in visiting on the next tour. Not to forget the three tanks which make up a monument commemorating the liberation of Massawa from the Derg regime in 1990. Oh yes, if we just open our photo albums… how many times would we find ourselves posing next to these thanks? Once? I doubt it. Especially children find it existing, so a snap shot is inevitable if you are visiting with younger ones.

Massawa is usually visited a lot during the summer; seems like the hot and sunny weather keeps attracting thousands of people from around the glob. And yes we cannot wait to celebrate the festive season at the end of the year; Massawa gets to be really crowded by people all over the country hoping to welcome a better new year. Sitting by the shore while deeding your feet and hands in to the soft pliable sand, a deep breath that clears all of the frustrations, a lungful of hopeful air running through the valves of our hearts and clears our minds just by looking at the awe-inspiring first sunrise of the year.  February too seems to be quite a busy month for Massawa and its residents, whom are annually busy to welcome the pilgrimages for a whole weekend full of delight, ecstasy because it is indeed a period of homage in which we pay our respect to our martyrs, a stage in which we look back and feel for the sufferance and merciless atrocity of the Derg regime on our people, and a phase of pride in which we bow our heads in gratitude to a vigorous memorial and tribute of the glorious  Operation Fenkil and renovate our loyal commitment to our martyrs and take on the ongoing development and sovereignty of the country riding on the backs and sweat of the “Warsay” generation, whom is dearly making sure not to let loose in vain the sacrifices of our martyrs, blood and sweat of generations and cold days in which our people were once living oppressed with in the walls of our own home.

Beginning on February 8, 1990 the EPLF forces began the offensive by cutting of the critical supply route from the Asmara garrison. It was definitely a surprise attack that stunned the Ethiopian military as they were in the meanwhile concentrating on previous attacks, never expected a well-planned and strong (compared to the preceding one) rebound back so soon.  By the following afternoon the EPLF forces were with in the suburbs of Massawa. On the third day of the offensive, February 10, 1990, the EPLF forces captured the Ethiopian naval base of Semhar. After such progress the only remaining portion of a hide-out for the Ethiopian troops were the islands. To achieve this EPLF forces used their nascent naval forces (mostly small gunboats) to attack from the sea during an artillery barrage. Using this artillery fire the Eritrean armor moved onto the causeways that connected the islands with the mainland. After this defeat was hard to avoid and victory was ours! The total independence of the land of heroes and freedom of Asmara; so to have a totally free country where its people are allowed to live and breathe as their heart’s desire was for the E.P.L.F forces the last task and they could totally sense that glory was around the corner after the success of the Fenkil Operation.

Many books have been written about this operation, many people told their stories and experiences about this special victorious task. But ever thought if Fenkil could have been really Fenkel? Would it have been glorious elsewhere or in another time and period? Maybe… or maybe not. I think that this operation is the result of the many previous years, as if we picture Fenkel as a dismantling operation as the word suggest: we could metaphorically imagine the oppression of the conquering states and the latest Ethiopian regime as a big rock stone-hard solid dry entity upon the soil of our homeland. Ever since 1961 children of this land suffocated by its repression started to free themselves and their souls first from under this solid existence and dared to dream of a non-subjected home, at any cost even if it meant a sacrifice that asked for their lives and youth.  They were dealing with a double aimed struggle: against the Ethiopian regime and all of the odds but themselves as well. Fighting with humanity itself, they totally cleared from their heads that they were human beings comfort: good food, clothing and shelter in the burning sun of Sahel, all these did not make the least of sense to these young passionate individuals. They defeated the fear in the end of the heart beat: the fear of never getting to open their eyes, they run fearlessly towards fire though death was expecting at the end of the journey. Destroy to replace, segregate to unify, and abolish to adjust: they were not going to let the bad seeds of the colonialists never to grow in to thorns, instead they had to be replaced by vigorous red flowers on the land that blood of young fighters and innocent people was being sacrificed.

Though from different tribes, religions, ethnic backgrounds and colorful diversity they relied in one unity; peacefully accepting and respecting their multiplicity and embracing the fact that we all share the Eritrean identity, didn’t matter if one was from a poor or rich house hold, didn’t matter if the families went to different religious places and prayed in different languages… it all did not matter. They were different yet the same, many in kind but the same, many in numbers but functioned as one strong form. This unified massive burning desire of creating a better place, made our young the young girls and boys lean on to each other so to face the massive of the alien power wrongdoing our people.

Many operations have been conducted: some failed some succeeded. They made massive social changes while still holding on to an AK-47; they were teachers, doctors, entertainers: a helping hand to their loving and supporting people. It took years of experience and sacrifice. The understanding gained through promising years made the creation of a lever and a fulcrum, metaphorically stating the Fenkel Operation, possible: enough to finally dismantle the big rock stone-hard solid dry entity. And so in few months after the successful operation the dream of Eritrean people came true: Eritrea was finally free and a better prosperous place for all of the Eritreans. There were indeed some strong firm roots behind the Fenkel operation, with out which would be hard to achieve: some great moral values that we still proudly keep living by, so to never loose the unity of our people. Eternal Glory to our martyrs!

Bring Eritrea In From the Cold???

Debre Sina: Pilgrimage to One of the Oldest Eritrean Monasteries Part I